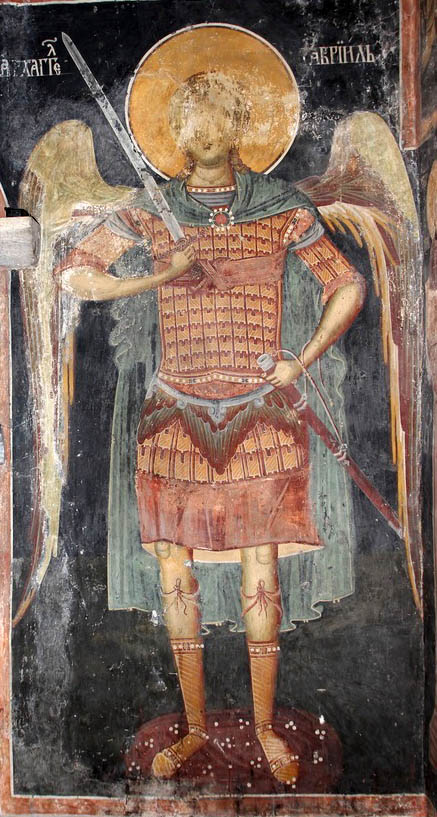 The entrance of Hagia Sophia moved from the atrium to the Southwest Vestibule naturally to accommodate traffic from the Mese, Hippodrome, and the Augusteon.  In time the atrium entrance wasn't used except for special events.  When great crowds attended services or festivals in the church all of the seven doors from the atrium were opened into the outer narthex.  The atrium continued to be the distribution point for the free distribution of bread to the poor and aged, which was done weekly next to the fountain.

Before you entered the southwest vestibule of Hagia Sophia from the Augusteon one passed through an antechamber.  It was a chapel dedicated to the Archangel Michael.  What was most notable about it was a famous standing mosaic of the archangel Michael. He was shown on background of gold mosaic.  Niketas Choniates describes it as "...the outer narthex which displays the exquisite mosaic of the very - 'first and greatest of the archangels serving God [Michael] with sword drawn, standing guard over the temple."  The mosaic probably dated from the 9th century.  Niketas thought the mosaic was beautiful because the face of Michael was of a handsome young man,  clean-shaven, with a round full face and tight curls.  His hair was always tied with a silk ribbon that often had precious stones like a diadem at the front.

The fresco on the right is of the Archangel Gabriel - one of a pair with Michael - from a Serbian church.  As you can see Gabriel's face has been attacked by a religious extremist.  Michael is much more damaged and has not been restored that Gabriel so I am using him to illustrate what the figure of Michael would have looked like.  The mosaic was famous all over the east and was copied in other churches.  The figure was larger than life, but we can't be sure because it and the chapel are gone.

It is difficult to figure out were the chapel was exactly.  The area directly in front of the entrance to the Southwest Vestibule is a jumble of stuff that is impossible to make sense of.  The current entrance is Turkish.  If the chapel was there its roof would have been lower than the big window in the wall of the vestibule.  Is so the mosaic would have been lower, too.  It would have been easier to see and admire if it was, being closer to anyone passing through the chapel into Hagia Sophia.  Since it was a chapel it would have had candle stands and other things for people to venerate the image.  I think the image was on a wall and not in an arch over the door, like the Theotokos with Constantine and Justinian.  If a door was underneath it wouldn't work as an icon of veneration and be called a chapel.

It is not clear where the chapel could have been since the colonnades of the Augusteon did not abut Hagia Sophia; and there was some distance between it and the church.  There must have been a colonnaded passage from it to the church. The colonnade could have been open or enclosed by two walls. Right up until the last days the Augusteon was a busy market and gathering place for the people.  Earthquakes and fires were always a danger to it.  The Column of Justinian survived the conquest and was taken down by the sultans.  It's gigantic bronze head could be seen nearby in a shed.

Maybe the chapel was free-standing - but that seems to have been unlikely since a visitor to Hagia Sophia immediately entered the vestibule after passing through the chapel.  In 1389 Russian pilgrims were still visiting the oratory and repeating the story off the boy and the angel. The Russians usually show little interest in the mosaics of the church, but they remark on this one.

Perhaps someday excavations in this area will clarify what has survived from the chapel.

George Majeska has paraphrased the story of the miracle of the Archangel Michael, which I repeat again here:

"During the building of St. Sophia a boy was set to guard the tools while the architects dined with the Emperor.  As the boy was watching over the tools, the Archangel Michael appeared to him in the guise of a radiant eunuch and offered to stand guard over the church until the boy returned from delivering the eunuch's message to the Emperor concerning the name of the church and the importance of completing it quickly. Divining the identity of the eunuch, the Emperor cleverly sent the boy abroad, so that he would never return to the church of St. Sophia and the Archangel Michael would be forced to remain as its guardian."

The Diegesis (you can read it here, in this website) further tells us that an angel disguised as Emperor Justinian appeared to the master craftsman and gave him precise instructions regarding the building of the vaults of the presbytery.  The angel wished the apse to have three lights by means of the three galleries, in the name of the Father, the Son and the Holy Spirit,  changing previous orders given by Justinian himself in error.  The altar was also said to have been made by an angel.

The apparition of the angel was said to have occurred in the South Gallery, where the Deesis is located. Many Byzantine churches had shrines to the Archangel Michael near their entrances to protect the building.  Hagia Sophia had set a standard that others followed.

michael is the supreme commander - "archistrategos" - of the heavenly host

The name Michael in Hebrew means "He Who is like God" and he is first mentioned in the book of Daniel.  In the Bible Michael is one of the great princes of heaven and rules the country of Israel.  Michael is God's counterpoint to fight the evil one and he triumphs over Satan in the Book of Revelation, casting him and his host of rebel angels into the lake of fire.

Christians began to venerate him specifically in the fourth and fifth centuries.  This began in Palestine and Asia Minor where pagan cults of angels already existed. As a heavenly power Michael does not have a physical, human-like form and his being cannot be expressed. Icons of him can only echo God's vast and infinite power as shown in the acts of the archangel.  Angels can never be worshiped - they can only be venerated as symbols or gateways of prayer to God.

The Testament of Solomon gives us an idea of the crazy stories and practices associated with angel worship that local Christian Bishops in Asia Minor in particular were warning about. One can see parallels with the stories of angels being involved in the building of Hagia Sophia.

The Testament of Solomon is a pseudepigraphical composite text ascribed to King Solomon and so associated with the Old Testament, but not regarded as canonical scripture by Jews or Christian groups. Pseudepigrapha are falsely attributed works, texts whose claimed author is not the true author, or a work whose real author attributed it to a figure of the past, like Solomon.  It was written in Greek. In its most noteworthy later versions, the text describes how Solomon was enabled to build his temple by commanding demons by means of a magical ring that was entrusted to him by the archangel Michael.  With this power Solomon compelled the demons to assist in building the Temple.  It gives me the creeps writing this!

When Justinian was 82 he traveled to the famous shrine of the Archangel Michael in Germia, in Anatolia.  I don't know why he went specifically, but with all of the troubles he had with the building of Hagia Sophia he could have gone there to thank the Archangel for his help. Another possibility is he went there to obtain Michael's help in protecting his soul as he neared death.  People went to Germia and bathed in special pools filled with small fishes that ate all of the dead skin and other junk off of you.  Maybe Justinian had a skin problem.  The shrine was destroyed and rebuilt, finally being looted and demolished in Turkish times.  The ruins are still there.

There was also a famous church dedicated to the Archangels built into the nave of the beautiful Ionic Temple of Aphrodite in Sardis.

You can learn more about the Shine of the Archangel Michael in Chonai by clicking here. 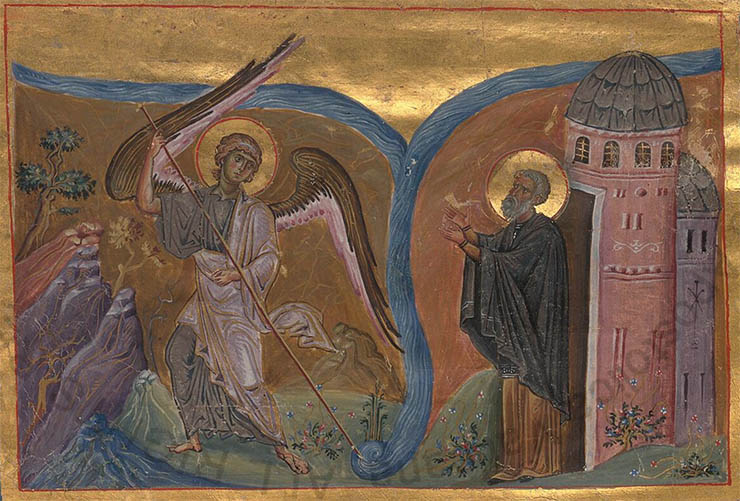 Apolytikion of Synaxis of the Archangels

O Commanders of the Heavenly Host, we the unworthy beseech you, that through your entreaties you will fortify us, guarding us in the shelter of the wings of your ethereal glory, even as we fervently bow before you crying: "Deliver us from all danger, as Commanders of the Powers on high! "

Kontakion of Synaxis of the Archangels 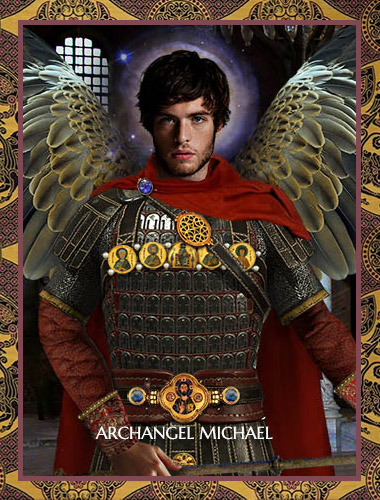 Mosaics of Seraphim Angels and Christ