14 Drawings of Theotokos, Angels and Saints for your own Icons 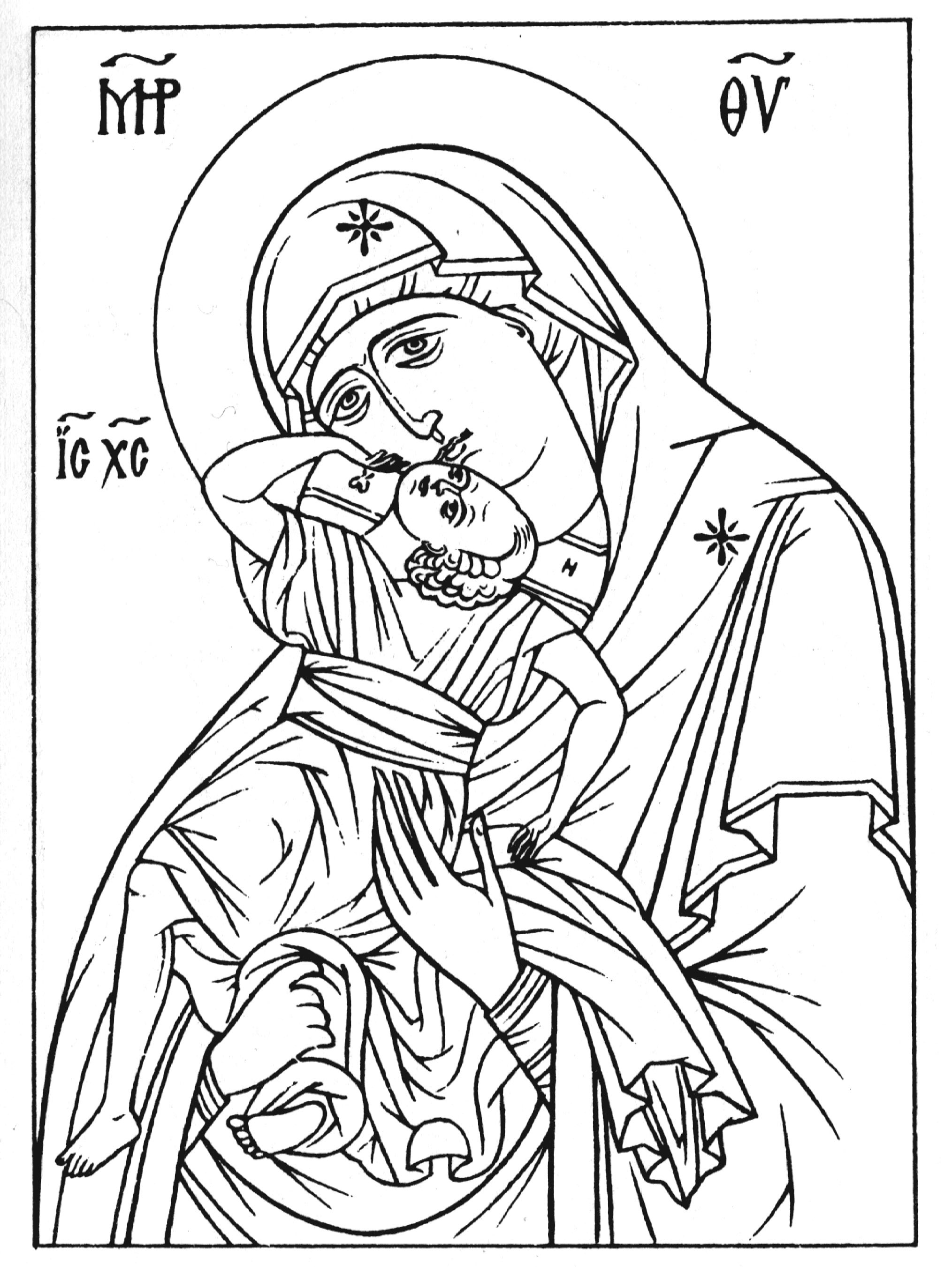 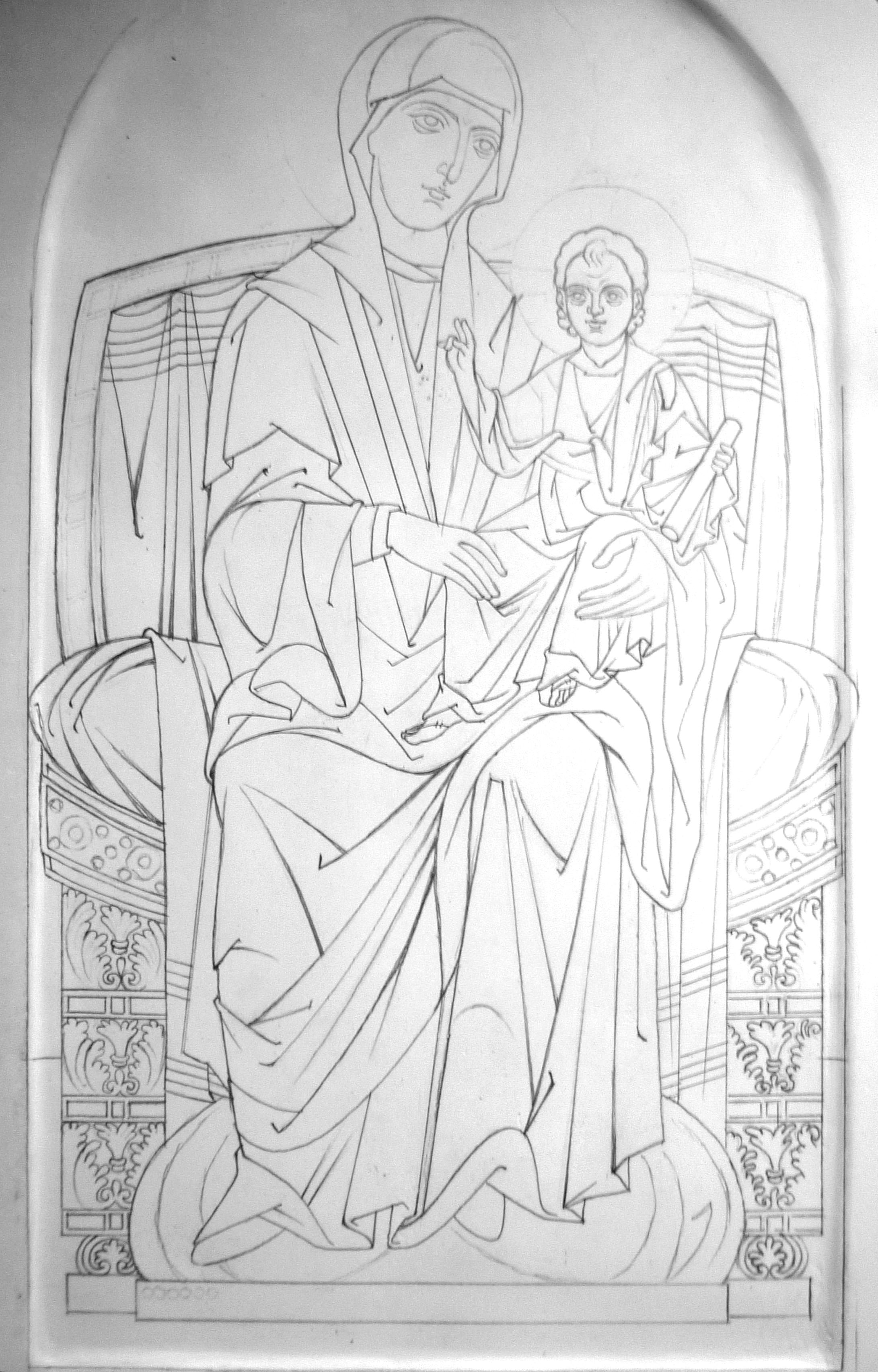 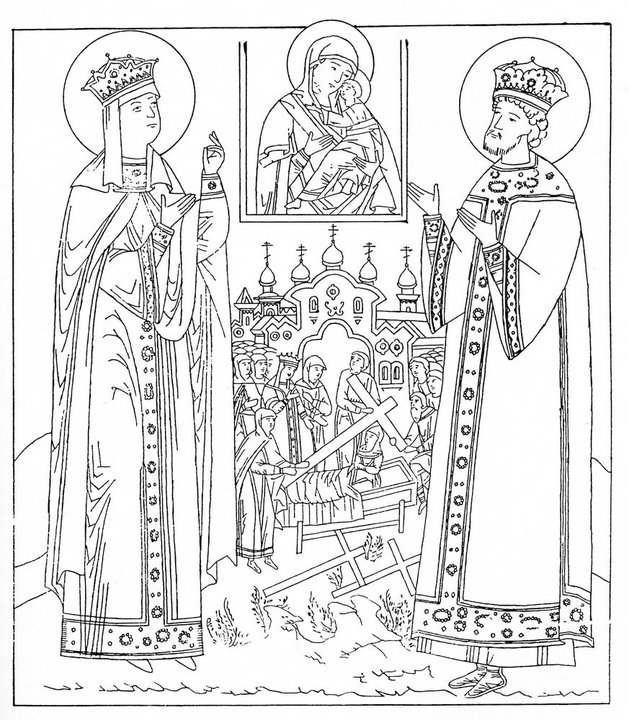 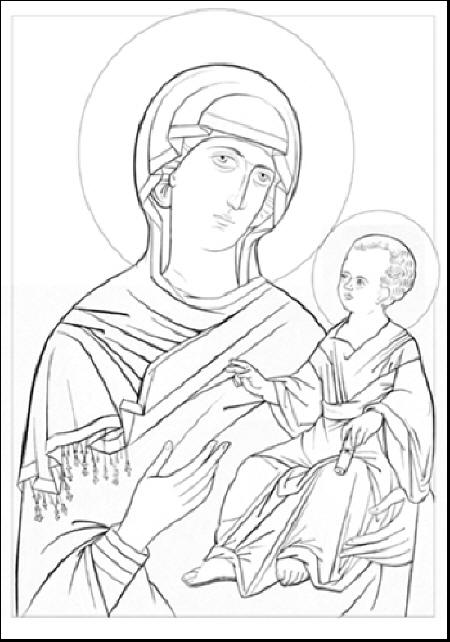 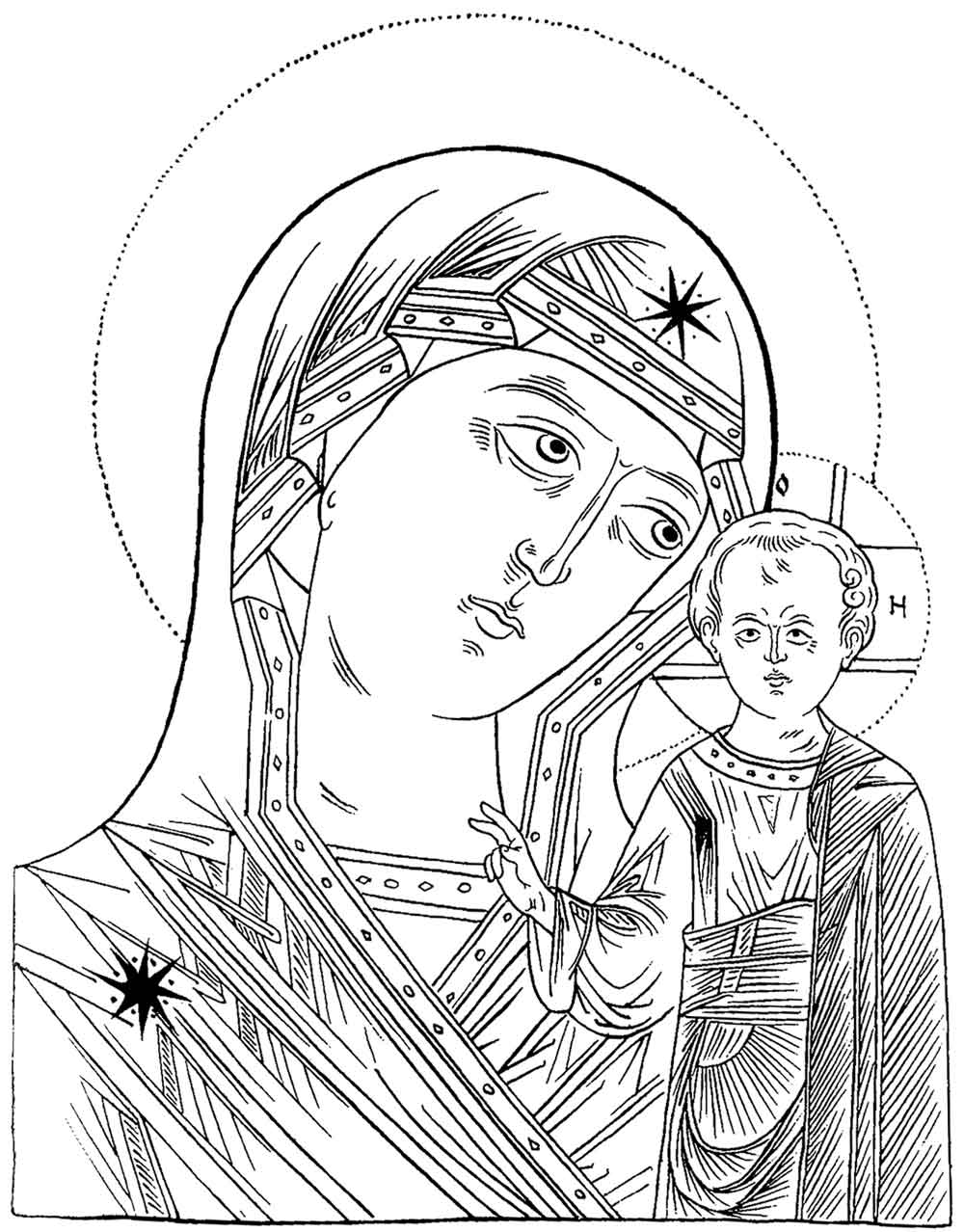 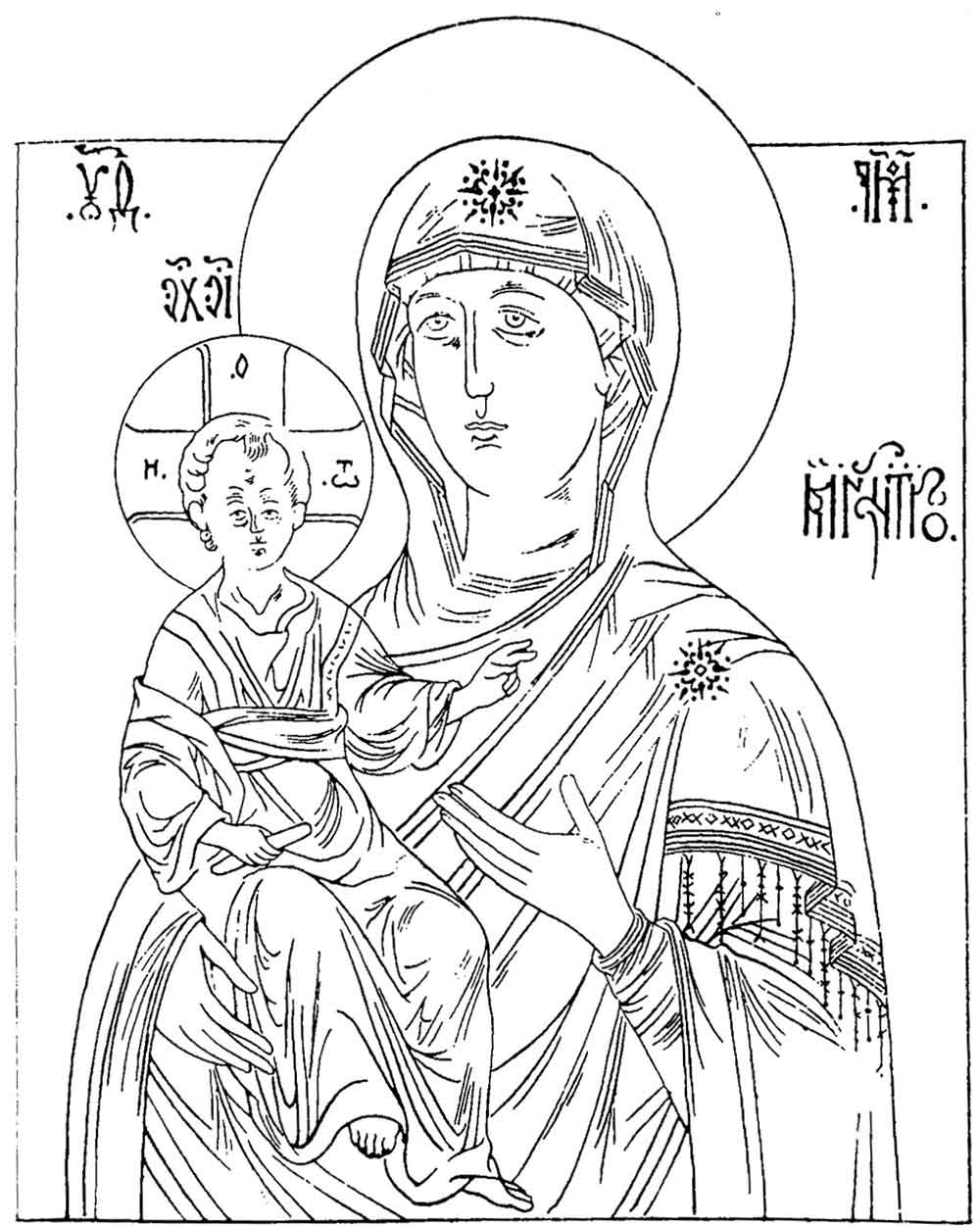 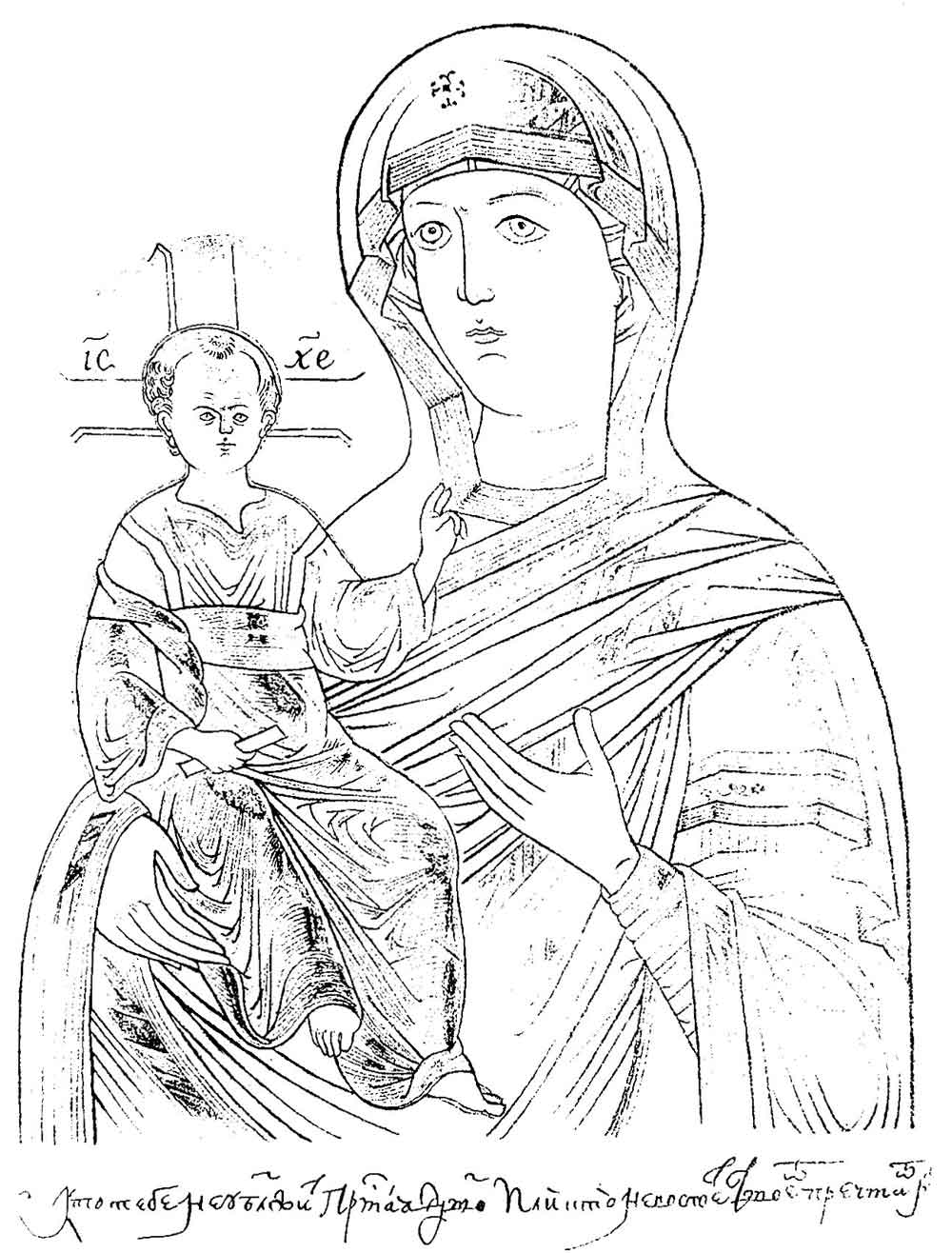 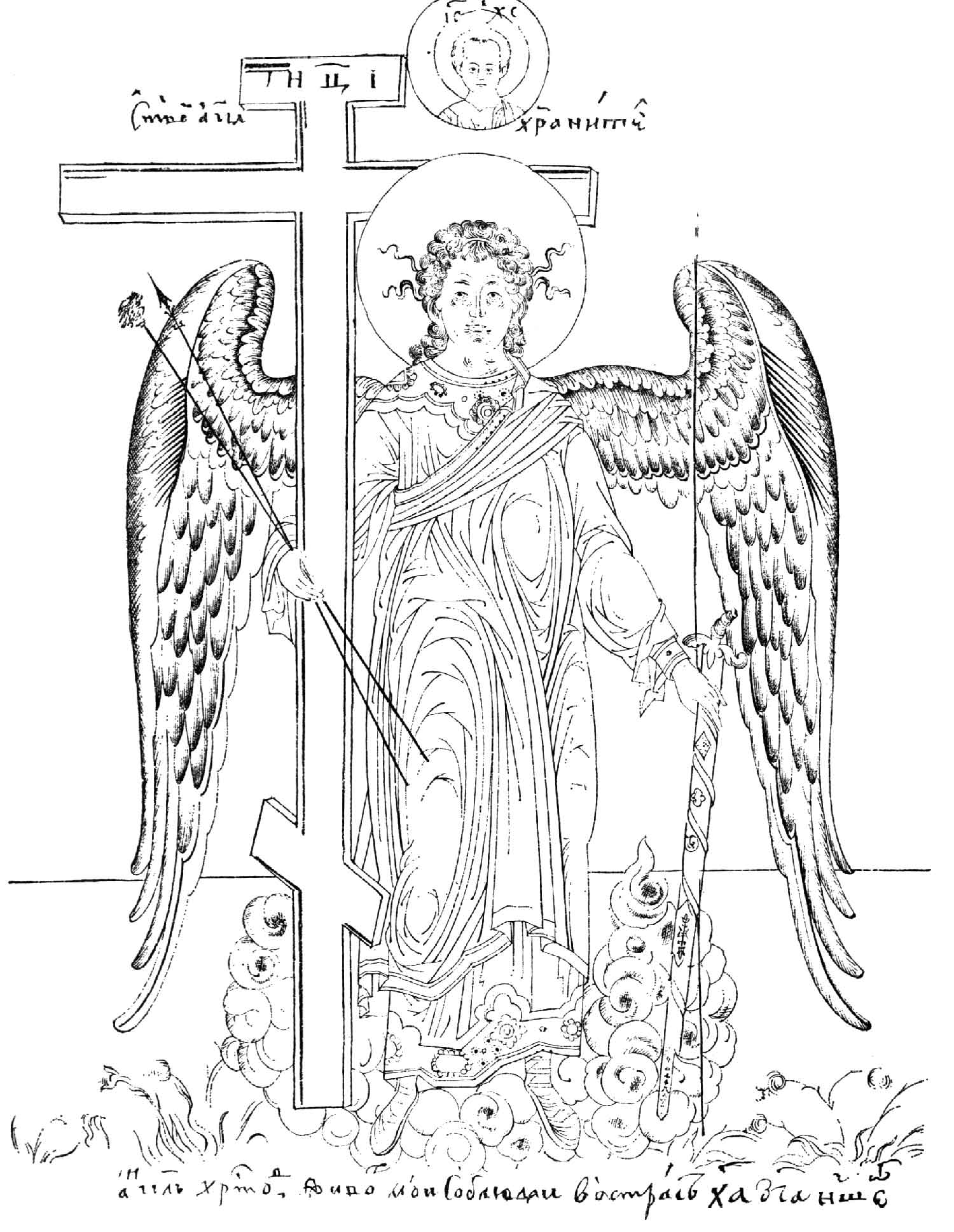 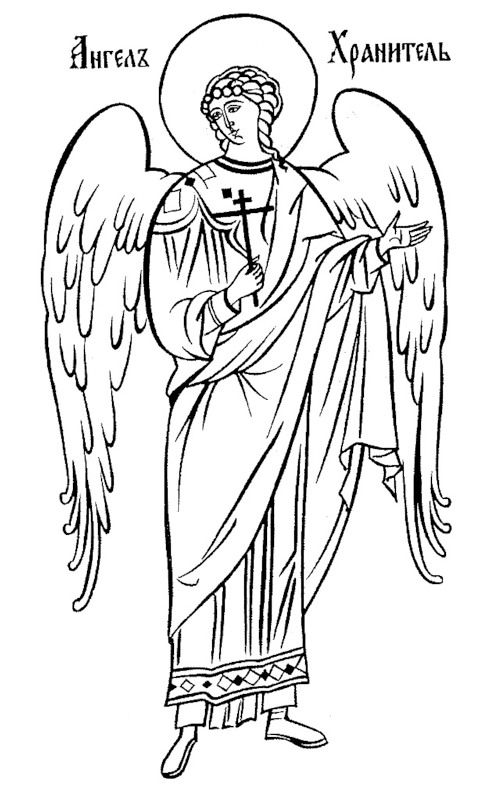 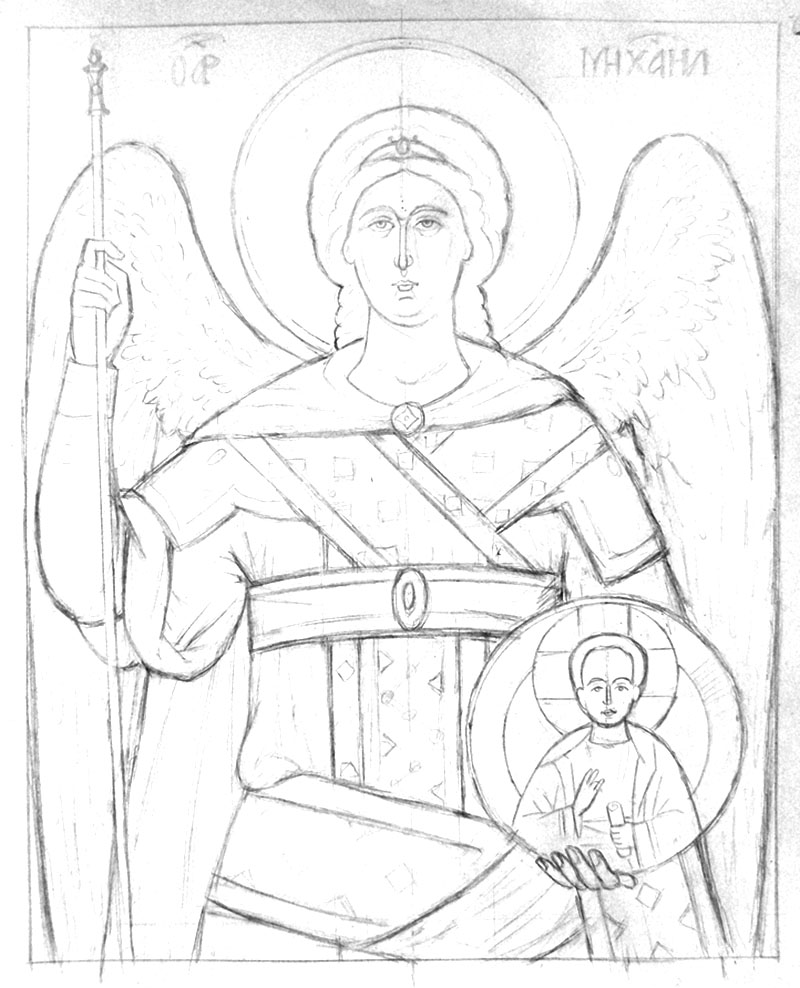 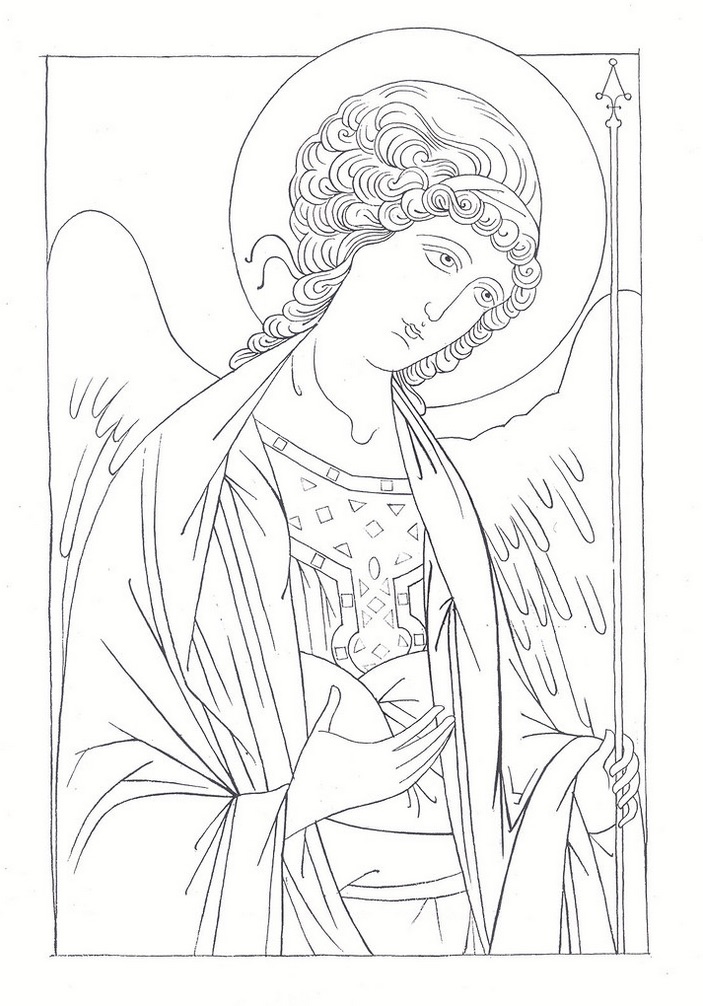 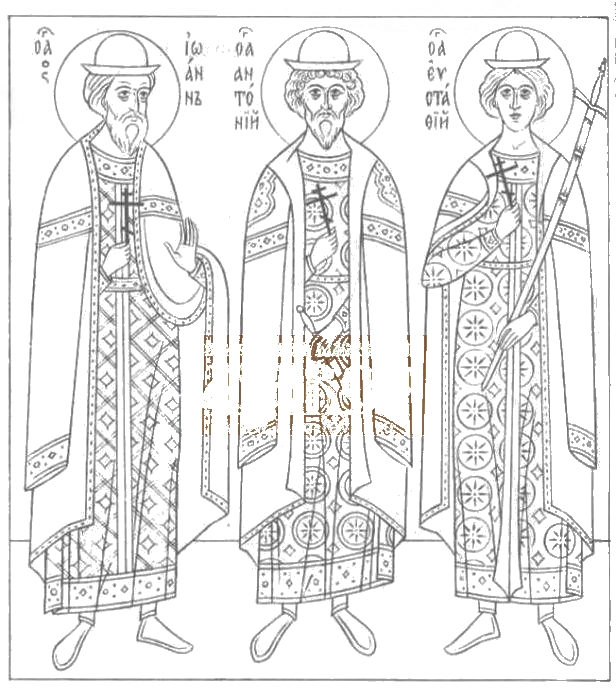 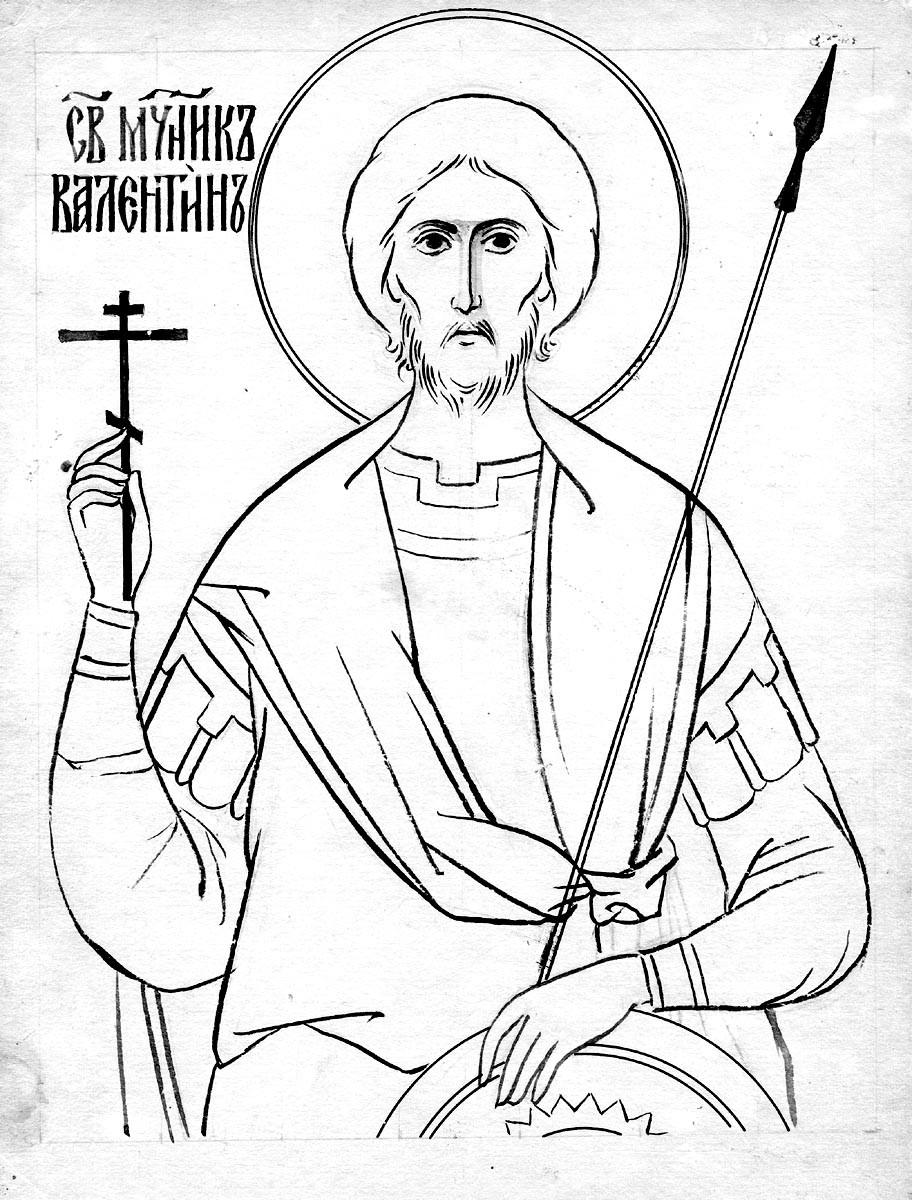 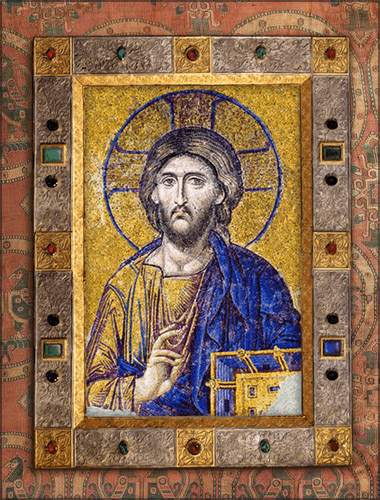 Icons of the Theotokos

This Byzantine icon of the Virgin Enthroned dates from the 12th century and is now in the Pushkin Museum in Moscow.  it is very large - six feet tall.  The Virgin and Child sit on lyre-backed chair hung with patterned silk.  Both the Christ child and Virgin face left, which indicates which side the spectator would have stood. This icon was made for a specific space.  The halo of the Virgin is in raised relief. The angels hold rods and orbs. 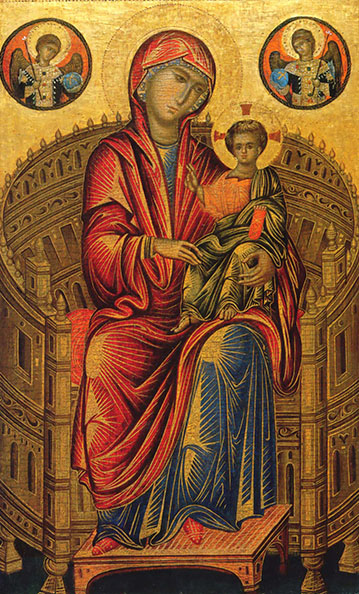 This icon of the Virgin Enthroned is in the National Gallery of Art in Washington D.C. and is called the Mellon Madonna.  It dates from the 12th century and is three feet tall and is painted on linden wood. It shows the Mother and Child seated on a curved wooden throne.  It is thought this throne could represent a circular forum in Constantinople - like the Forum of Constantine.  It certainly is an interesting feature.  The angels are dressed in imperial regalia on vermillion colored medallions.  The gold background of the icon had been renewed.  These angel medallions in regalia appear to be an innovation of the 12th century. 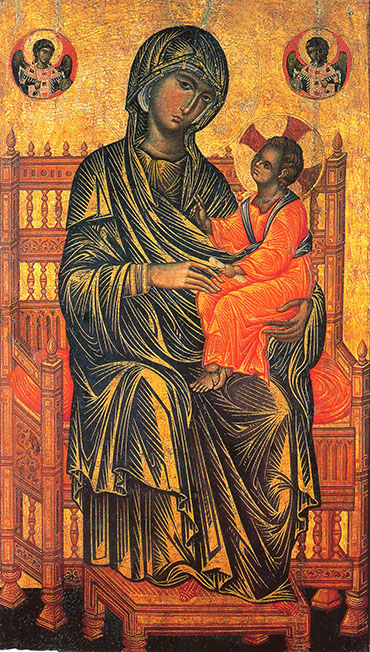 The very large, 52 inch tall, icon of the Virgin Enthroned is called the Kahn Madonna and is also in the National Gallery of Art in Washington D.C..  Both the Kahn and Mellon Madonnas are named for their former owners.  This icon is painted on poplar wood and the entire face of the panel has been covered in linen canvas under the gesso. There is a split in the panel on the right side that has distorted the cross bar in the halo of Christ.  The gilding was done over orange bole.  The halos are tooled freehand which demonstrates the artist was experienced in making them, such tooling was common in 12th century Byzantine icons.  The faces are exceptionally beautiful are are virtually intact.  The wooden throne is straight-backed with turned spindles and is gilded.  This is a typical Byzantine chair of the period.

Although the Kahn and Mellon Madonnas appear related the technique of painting the faces sis different and indicates different hand.  To some extent the difference in scale means this icon has a much larger face allowing for more detail.  This icon gives us an idea of the quality and scale of 12th century icons painted during the Comnenian Dynasty. 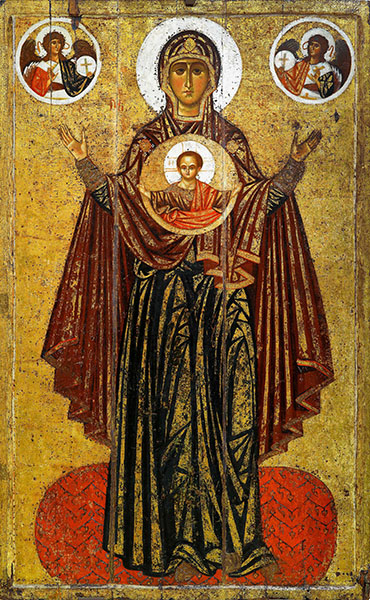 This icon is called the Great Panaghia and dates from the end of the 12th century.  It is over six feet tall and is in the Tretyakov Gallery in Moscow.  The icon was painted in Russia and is a copy of a Byzantine work. The Russian artist has decided to freely interpret the clothing of the two archangels from their Byzantine originals, which carry crosses on stoles.  This probably reflects the dress of a bishop rather than that of an emperor.  The Russian artist would not have been familiar with the imperial regalia of Constantinople.  The huge red carpet under the feet of the Virgin reminds us that such things were woven in Byzantium and Asia Minor.  Carpets like this were extensively used in churches and in homes.  The vermillion in the clothes of the archangels links to the red clothes of Christ and then to the red carpet at the bottom creating a bright symphonic effect across the icon.  The use of white is also somewhat unusual. This icon was found in the early 20th century in a Yaroslav church outbuilding completely repainted in oils.  When it was restored it created quite a sensation.

The pose of the Virgin and Child relates to icons in the Blachernae Church of the Virgin in Constantinople that depicted intercession by the Theotokos for believers and glorified the incarnation.  There was a famous weekly miracle in this church that was well-known all over the Orthodox world.  The miracle ended in 1204 when the Crusaders sacked the church and the icon associated with the miracle vanished. In Russia the Great Panagia had been considered the patron of Princes. 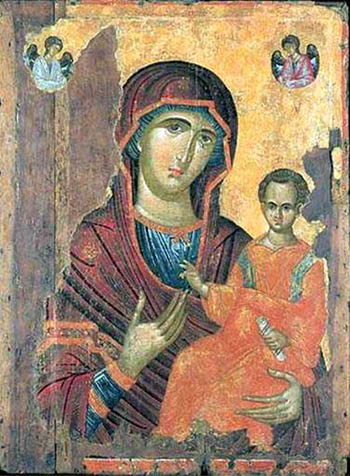 I don't know where I found this Byzantine icon of the Hodegetria.  It looks 14th - early 15th century to me.  Note that the angels have their hands covered.  This indicates the holiness of the sacrifice of Christ and His Incarnation.  The original Hodegetria was strongly modeled like this one. 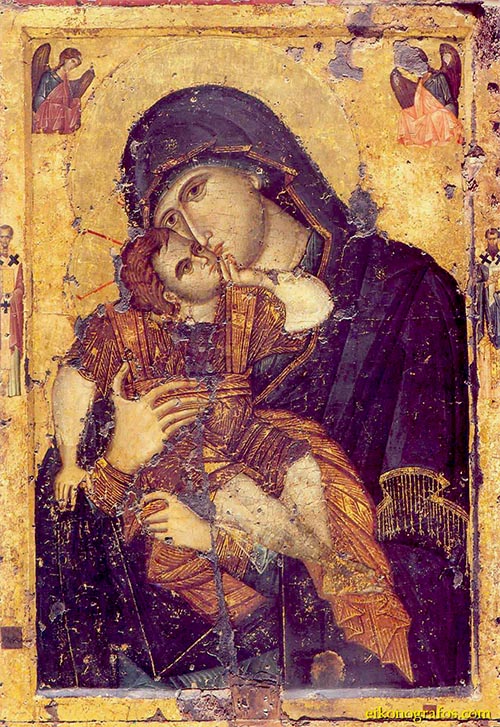 An unusual icon of the Theotokos and Christ.  This icon which has been called the Virgin with The Playing Child is  version of the Eleousia icon. The artist has shown great freedom in the modeling of the figures.  They are not classically majestic or restrained.  I have to see if I can find out were it came from and the date. 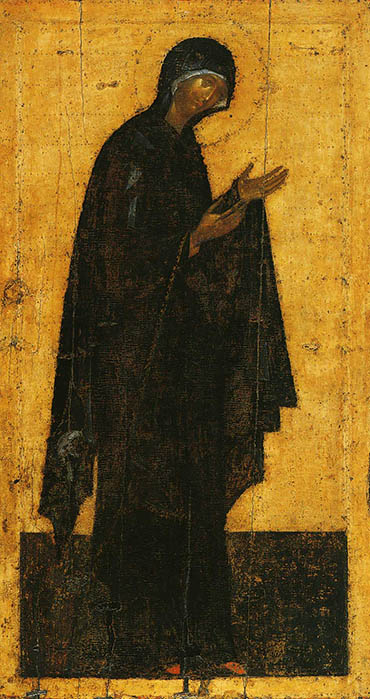 Andrei Rublev painted this Virgin from a Deesis tier in the last quater of the 14th century.  It is huge - 83 inches tall and comes the from Annunciation Cathedral of the Moscow Kremlin. 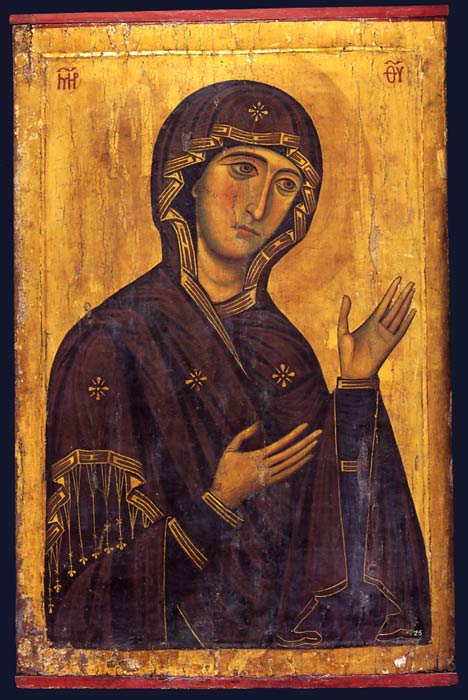 This icon of the Virgin comes from a Great Deesis in St. Catherine's Monastery in Sinai, Egypt and dates from the 12th century, the same period as the Virgin of Vladimir. It shows the Theotokos bending her head towards Christ with her hands outstretched in supplication and adoration. The left hand of the Virgin is beautifully drawn and painted with delicate tapering fingertips. The face - especially the eyes - is dry and linear in execution. Red lines drawn on the upper eyelids and along the ridge and tip of the nose are techniques used to add life and color to the face. The icon is unusual because there are four stars on the purple maphorion of Mary; one on the crown of the head and three across the breast, normally there are two. The background gold is actually done in silver leaf which has then been varnished with a orange colored varnish to imitate gold. 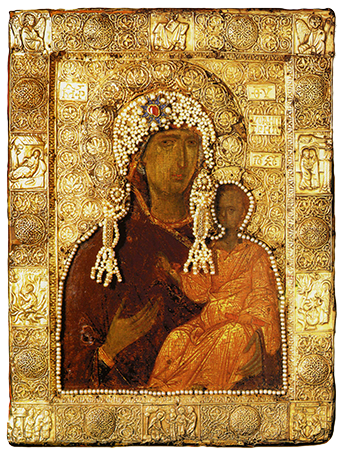 This icon of the Hodegetria is Byzantine and dates from the first third of the 14th century.  It is 15 inches tall and is covered with a silver-gilt cover.  It is now in the museums of the Moscow Kremlin.