Icons of Christ Mandylion & Their History 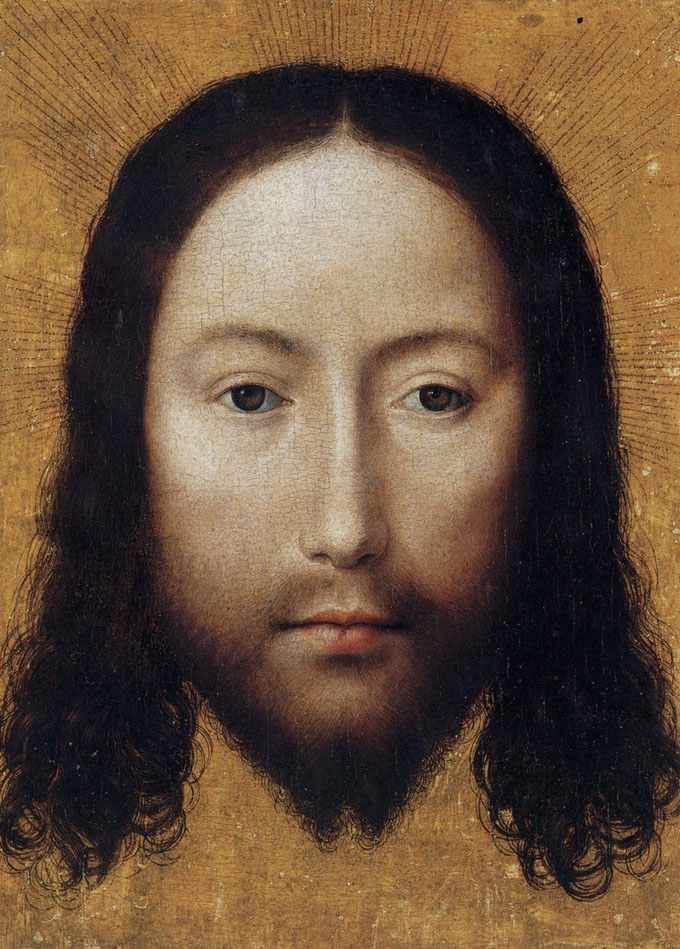 The Mandylion of Edessa was one of the most important relics in Constantinople, and it still exists, forgotten and ignored in Notre Dame in Paris. There is an analogue in the West for the Mandylion - Veronica's veil - called the Sudario.  It was painted many times by El Greco, a Byzantine icon painter from Crete who moved to Spain, as a stand-in.  The Mandylion was not well-known in the west.  Veronica's veil became an object of devotion in the west in the 12th century when the relic came to Rome.

The Mandylion came to Constantinople from the city of Edessa in the 10th century.  It first occurs in written accounts in the mid-fifth century.  The solemn entry of the Mandylion from Edessa (15 August 944) was one of Emperor Romanos I's major triumphs.  Romanos had taken the throne for himself and his two sons  - making the rightful emperor, Constantine VIII - still a boy - a lower ranked co-emperor.  Romanos also married his daughter Helena to Constantine.

During the procession bringing the Mandylion through the city a voice was heard in the air saying: "Constantinople, receive glory and joy and do you, Constantine Porphyrogennetos, receive your empire", meaning Constantine would soon be sole emperor, which came to pass.

The Mandylion was believed to be a linen towel that had touched the face of Christ that retained his features from the sweat of his brow imprinting on the cloth. The story was that Christ Himself had sent his image in this impression to an Eastern prince who wanted to meet him, but was unable to make it to Palestine.  Christ was said to have sent this towel to the prince along with a letter. It was believed the towel survived several hundred years as a treasured heirloom of Christ.  Because it had touched the face of Christ and bore his physical presence in its fibers it was one of the rarest of the rare when it came to relics of Christ.  After the establishment of Christianity in the Roman Empire as the state religion by Constantine his mother, a Christian herself, went to the Holy Land and mounted an expedition to discover and verify the places of Christ's life and ministry.  The most important were those sites associated with the passion and resurrection - the site of the crucifixion and tomb of Christ.  In the course of searching beneath the Temple of Venus which had been built over the site by Hadrian, Helena's men believed they found the three crosses used during the crucifixion, one for Christ and the other two for the men who had been crucified with Him.  The "True Cross" of Christ became one of the most important relics of all associated with Christ himself that was imbued with his sweat and blood, the actual evidence of His real person still on Earth. 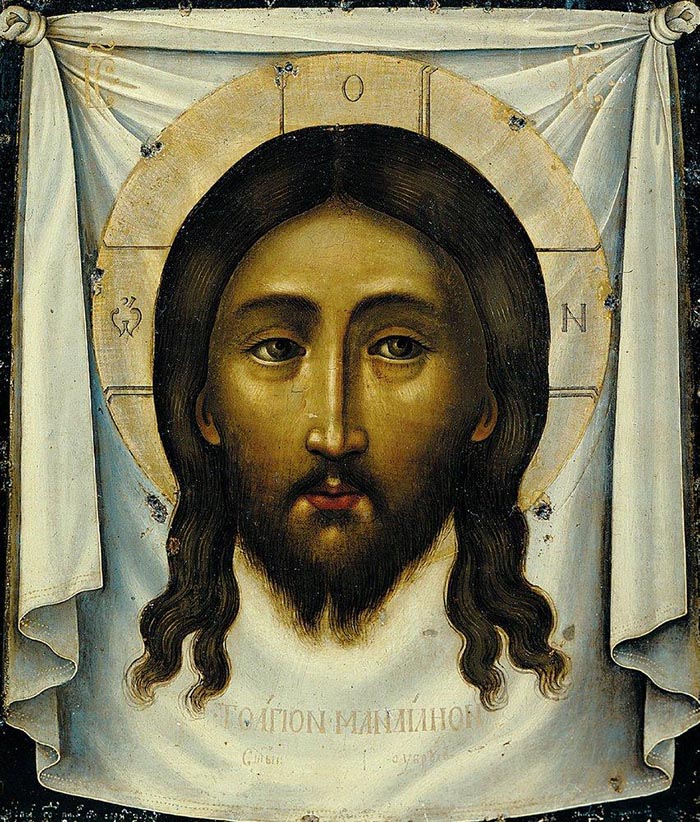 There were other Passion relics, like the winding ribbons and shroud that were used to wrap Christ's body before he was laid in  the tomb.  There were also the nails and spearhead that had pieced His body.  Another, one that became more famous than any of them, was the Crown of Thorns that had been placed on his brow by the Roman soldiers to mock him as King of the Jews.  There were also robes and cloaks that were believed to have been worn by him.  All of these relics were eventually collected and brought to Constantinople. The Persian and Muslim invasions of the eastern provinces of the Roman Empire in the 6th and 7th centuries, wrecked and destroyed most of the  Roman cities of the east, including Jerusalem.  The Persians carried off the True Cross, which had been displayed in huge marble basilica by Constantine, back to Persia after wrecking and burning Jerusalem.  The inhabitants were either slaughtered or sold into slavery.

The Persians took Egypt and made it right up to the walls of Constantinople, where their invasion failed after a terrible siege of the city. Enroute to Constantinople the Persian army destroyed every ancient city of Asia Minor they passed through.  The devastation was apocalyptic and it was the closest thing to "End Times" the seven churches of Asia Minor had ever experienced.  Although it looked like the end was near a new Emperor appeared, Heraclius, who marshaled the remaining forces and resources of the Empire and launched a holy crusade to expel the Persians from the empire and recover the True Cross, which was ultimately successful.  The True Cross was returned to what was left of Jerusalem and eventually found its was to Constantinople. 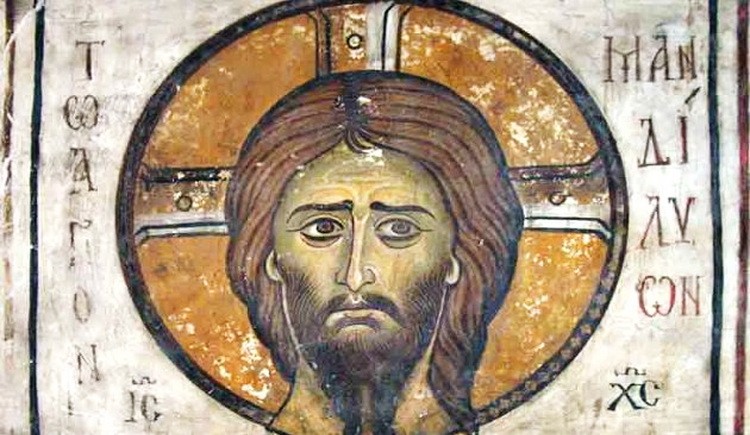 During all of this chaos and destruction the people believed that the Holy Relics of Christ and His mother had protected them and delivered them from fire and destruction.  In the 7th century relics were used - like the maphorion or robe of the Theotokos - to drive invaders from the walls of Constantinople with great effect.  The salvation of the city was attributed to their presence within the walls.

One did not actually see the robe of the Theotokos carried in the arms of someone and paraded around the city.  The robe was sealed up in a box which was what people saw.  From time to time the box was opened and the relics were checked and verified to be there.  A 100 or more years might pass between inspections.  Meanwhile the box containing the relic was stored and displayed in a special shrine called the Soros next to the great church of the Theotokos of Blachernae. 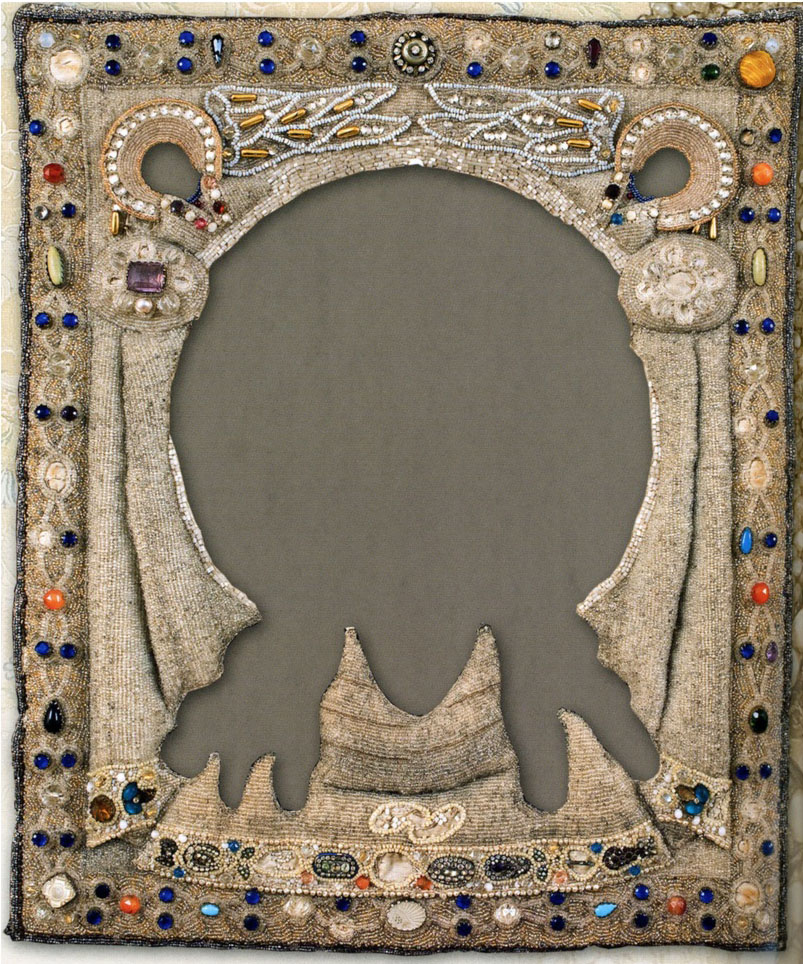 Other cities had special relics that protected them, too. The most famous outside Constantinople was the Mandylion which had been sealed up over the gate of the city of Edessa.  After a long and interesting trek the Mandylion was brought to Constantinople.  When it arrived on August 15, 944 it was housed overnight in the Church of the Blachernae. The next day Constantine and the two sons of Romanos received it into their own hands.

The relic was acclaimed by huge crowds, including all of the church hierarchy, nobility and masses of common people.  It was boarded on the Imperial yacht and sailed around the walls of the city.  It processed through the Golden Gate like a triumphant emperor.  Finally it arrived at Hagia Sophia and was placed in the sanctuary of the church.

Constantine had the Mandylion sealed up in precious silver-gilt box and sent to the Church of the Theotokos of the Pharos, which was within the grounds of the palace.  This church already housed most of the important relics of the city - like a treasure box of spiritual power - to protect Constantinople and the Empire. 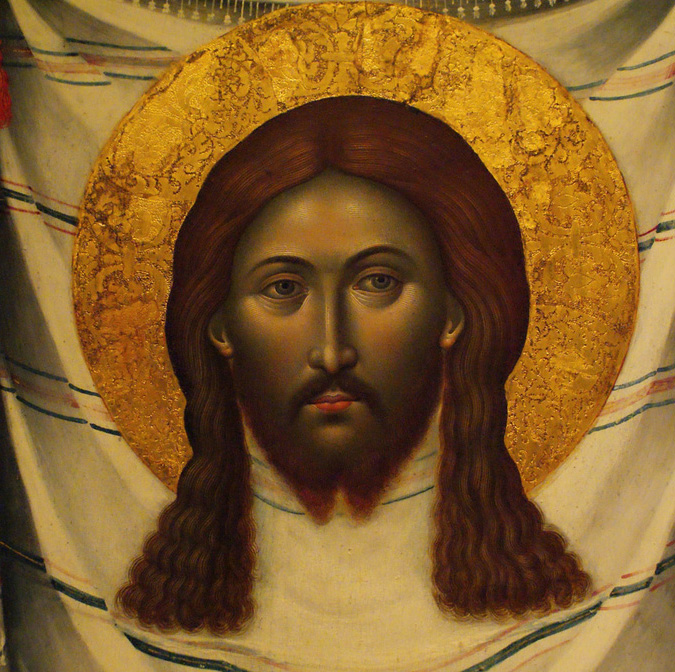 The following was recited for the Mandylion when it arrived in Constantinople:

"But, o divine likeness of the likeness of the unchanging Father, o form of the Father’s person, o holy and venerable seal of Christ, our God’s archetypal goodness—I speak to you in faith as if you had a living soul—save and keep always our noble and gentle ruler, who keeps the feast of your coming in due fashion, the one you placed on his father’s and grandfather’s throne in your presence. Keep his o spring safe for the family succession and the security of rule. Bring to the people a state of peace. Keep this queen of cities free from siege. Make us pleasing to your image, Christ, our God, to receive us into his heavenly kingdom, praising him and singing hymns, for to him in due honour and worship for ever and ever. Amen."

The Mandylion was suspended in mid-air from the bema arch over the sanctuary by two silver chains.  It moved in the wind or through the movement of the earth in tremors.  There were special mirrors to reflect light upon it that could be adjusted through the movement of rays of sun through the church. After dusk or on cloudy days the Mandylion was lit by beautiful hanging candelabra.  There was continuous adoration of Christ by chanting and singing - 24 hours a day. 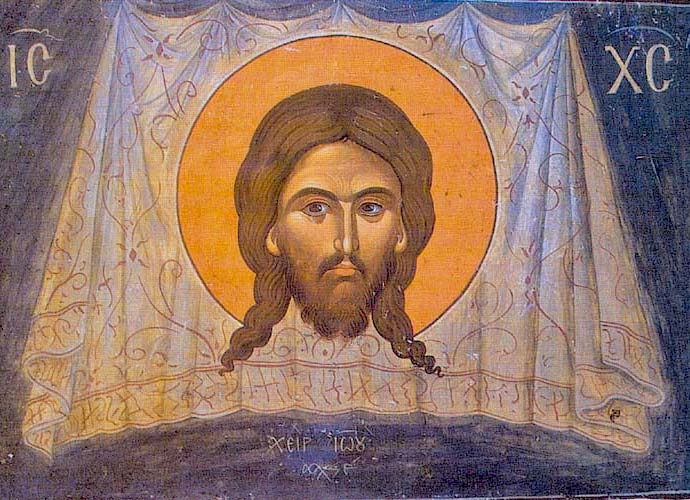 Since the Mandylion was never taken from its box no one ever saw it publicly. It had always been very hard to see the features of Christ in the faded image anyway. What they did see was the box, which must have had an image on it of the Mandylion in silver-gilt relief.  The experience of seeing the image suspended in air, glittering in the light, with incense and the unearthly voices of the choir deeply impressed anyone who was there.  People, like the King and Queen of France, visited Constantinople in part to see the Mandylion and the other relics of Christ's Passion that were there.

Many Orthodox Churches in Russia, Serbia, Bulgaria and Asia Minor placed icons or paintings of the Mandylion in their sanctuaries and bema arches to echo the church of the Pharos in their own towns and monasteries.  After 1204 this tradition continued - and grew - even after the relic had left for Venice and France.  Mandylion icons did not only evoke the memory of the actual relic, they acquired their own artistic merit as well as spiritual meaning. 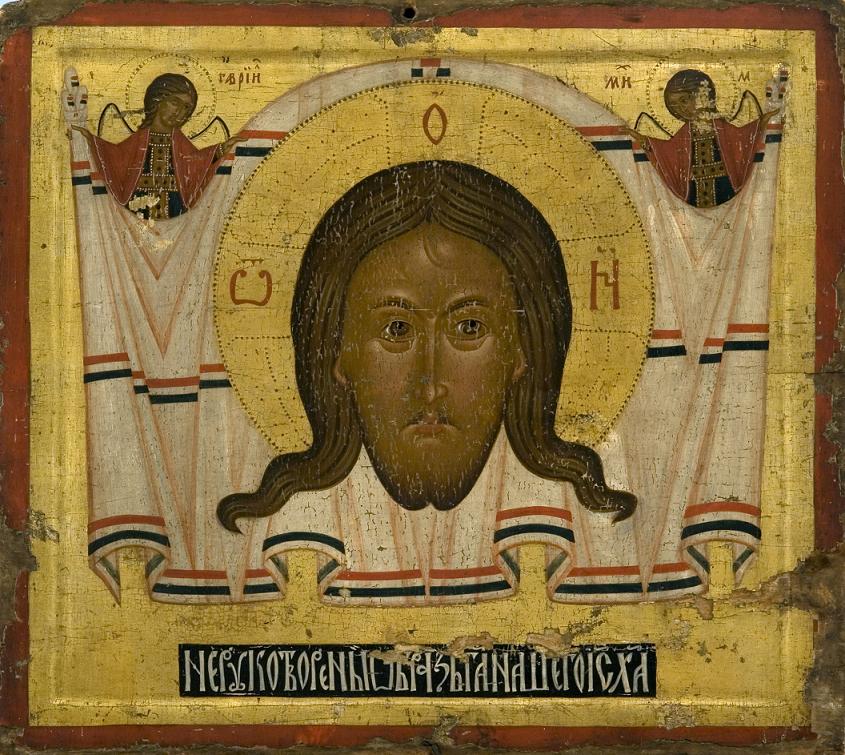 During the conquest of the city in 1204 by the Latin Crusaders of the Fourth Crusade, one of the leaders of the knight with a small band of men, made their way along the seashore under the walls of the city to the Boukoleon Palace, which was built alongside the Church of the Pharos,  this knight wanted to capture the palace to protect some French princess and their noblewomen who were living there.  During the fall of the city there was rape, murder and looting on an epic scale, which threatened the women and the relics. His capture of both the Boukoleon and the Church of the Pharos was signaled by his banners which he had flown from the towers and ramparts here.  He saved the relics, which would have been torn to pieces for their jeweled and gold adornments had the crusader rabble got at them. 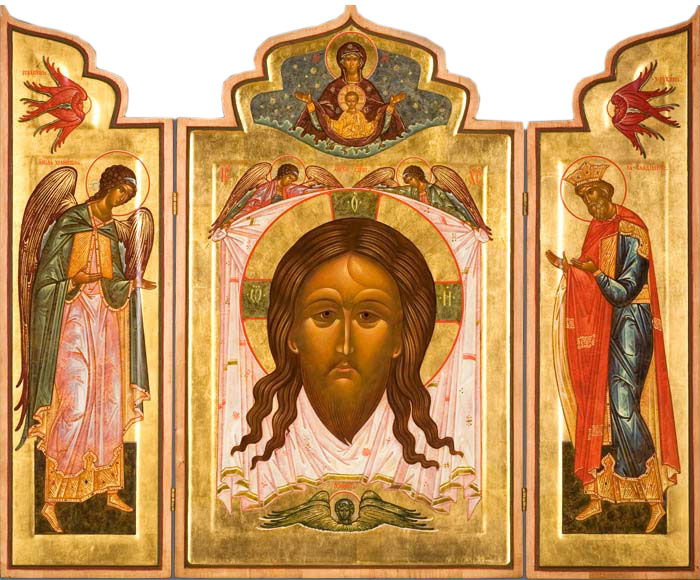 After 1204 the city of Constantinople was ruled for more than 50 years by Flemish emperors.  The last one, Baldwin the Broke, was on his throne for the longest.  He sold off anything he could from the palaces and treasures that survived.  He even tore off and sold the lead roofs of the great buildings an churches of the city.  Hundreds of shiploads of marbles were dispatched to the west as building supplies.  The most important - and valuable thing the Latin emperors had - were the relics of the Pharos church which were pawned to Venice and then sold to the Kings of France, who built the Sainte Chapelle to house them.  The most important for the French were the Crown of Thorns and the nails of Christ.  They didn't have so much interest in the Mandylion, which they kept in its original Byzantine box until the French Revolution.  I cannot tell you anything else about the Mandylion except it is still among the collection of relics at Notre Dame in Paris, ignored by its current custodians.  The Mandylion was always difficult to see,  now it is listed as a dirty, faded bit of ancient cloth with no identification. 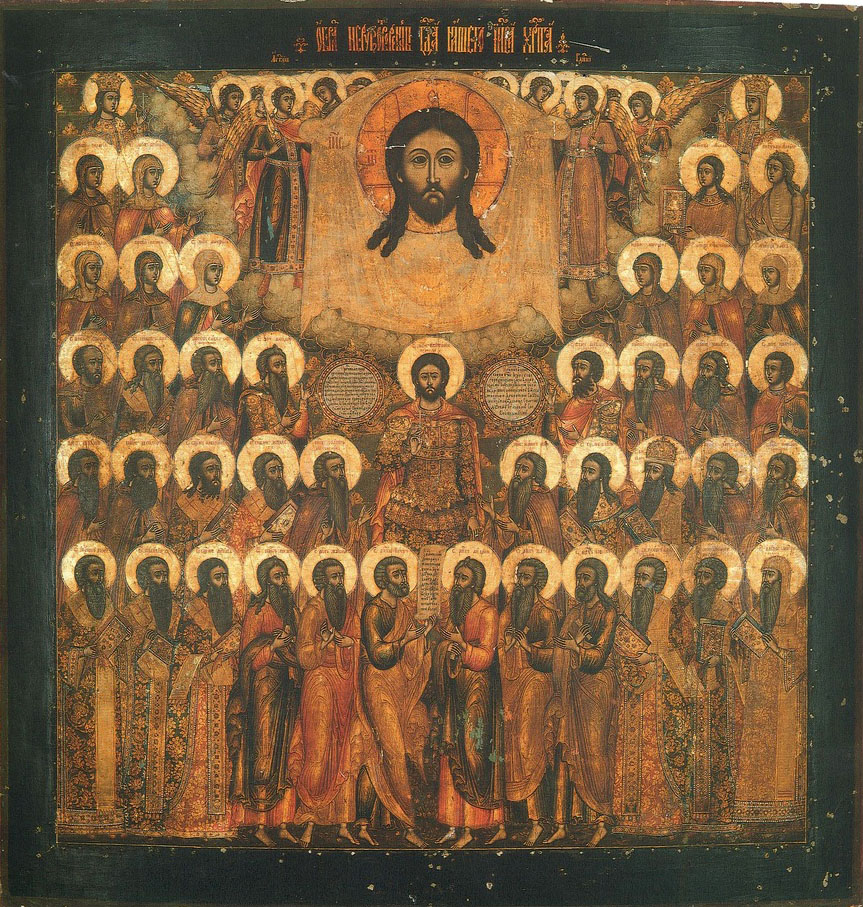 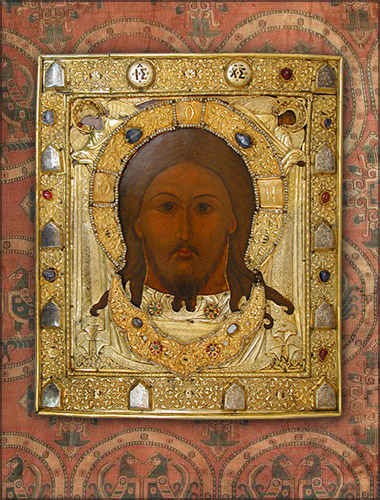 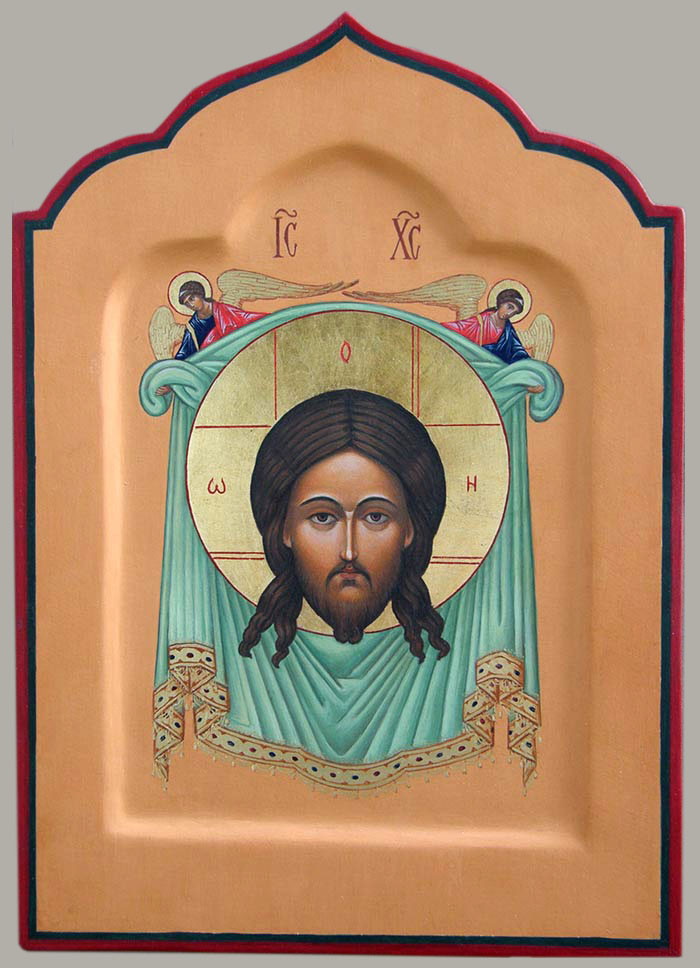 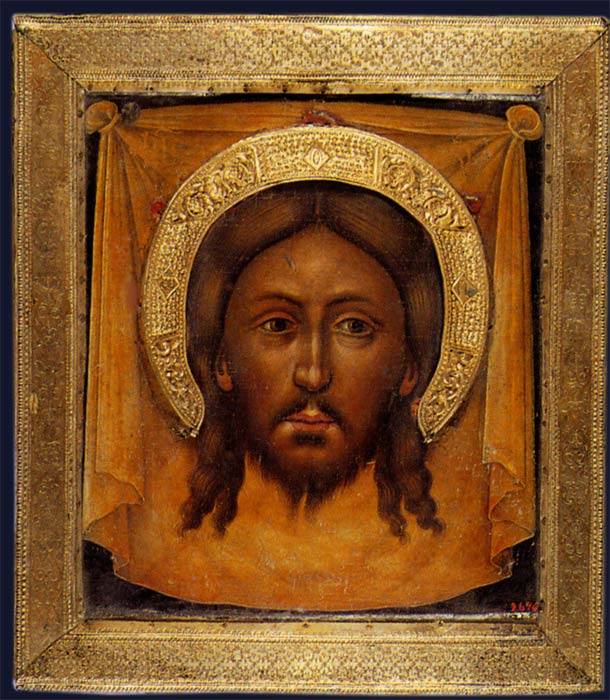 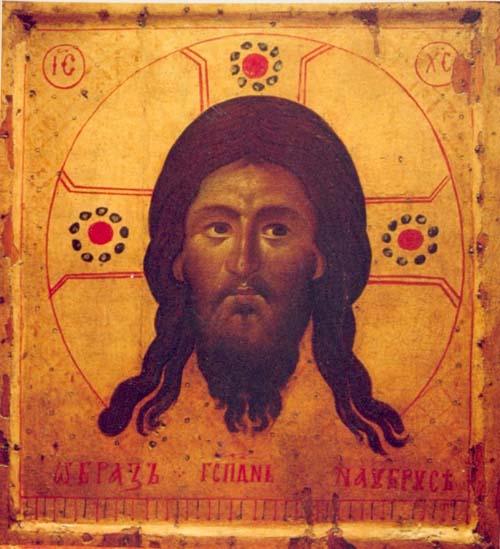 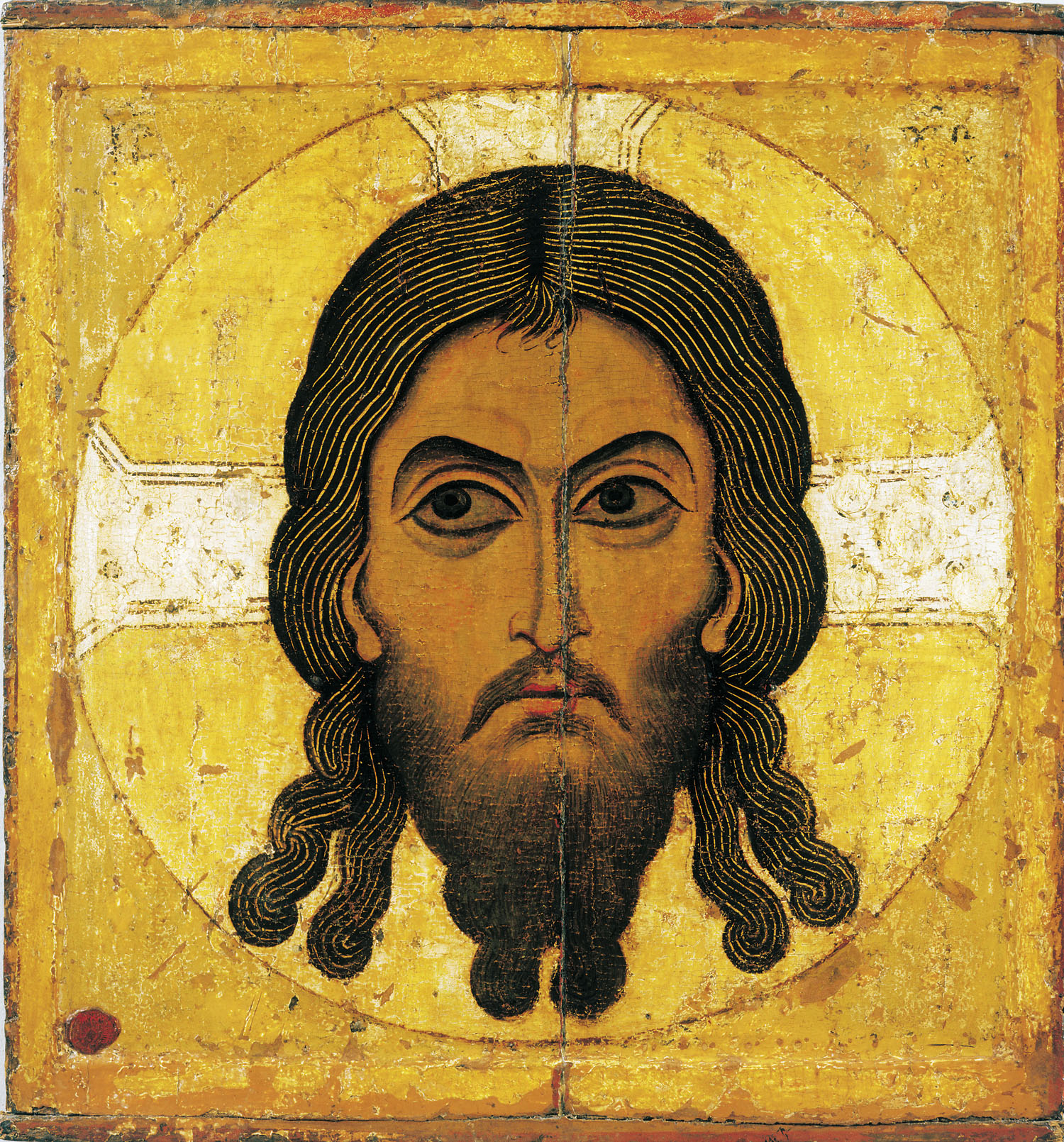 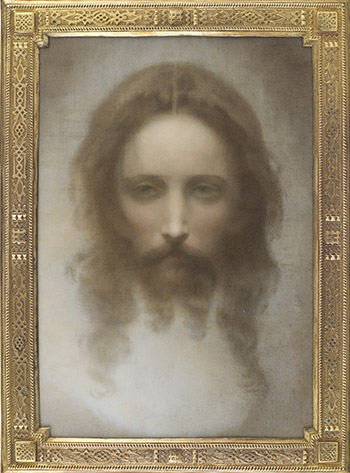 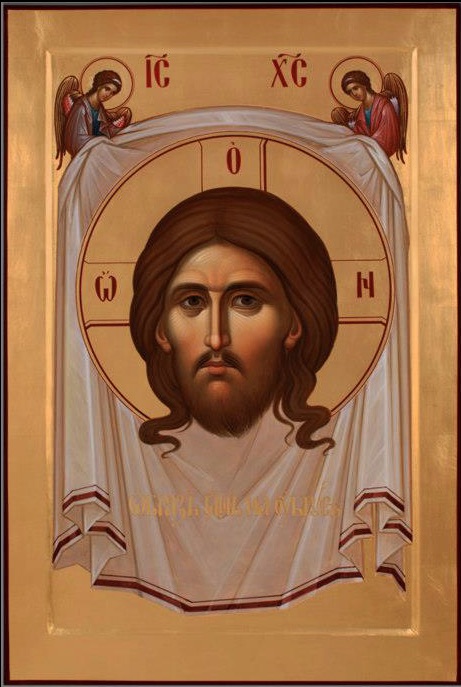 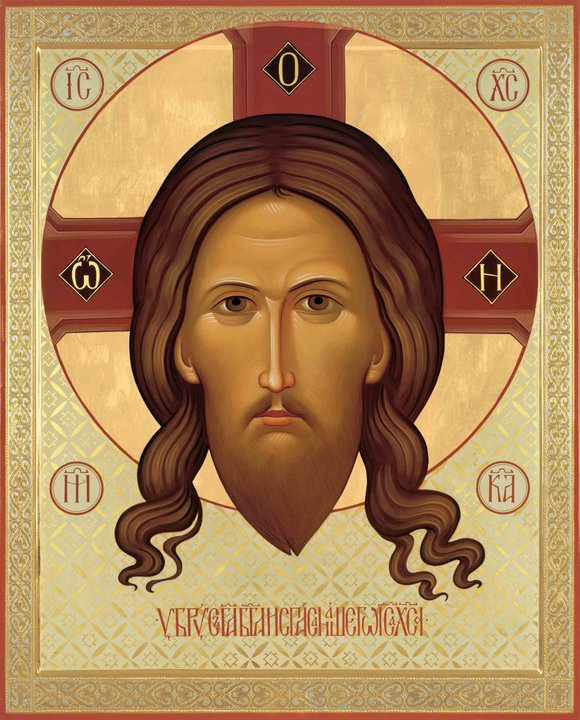 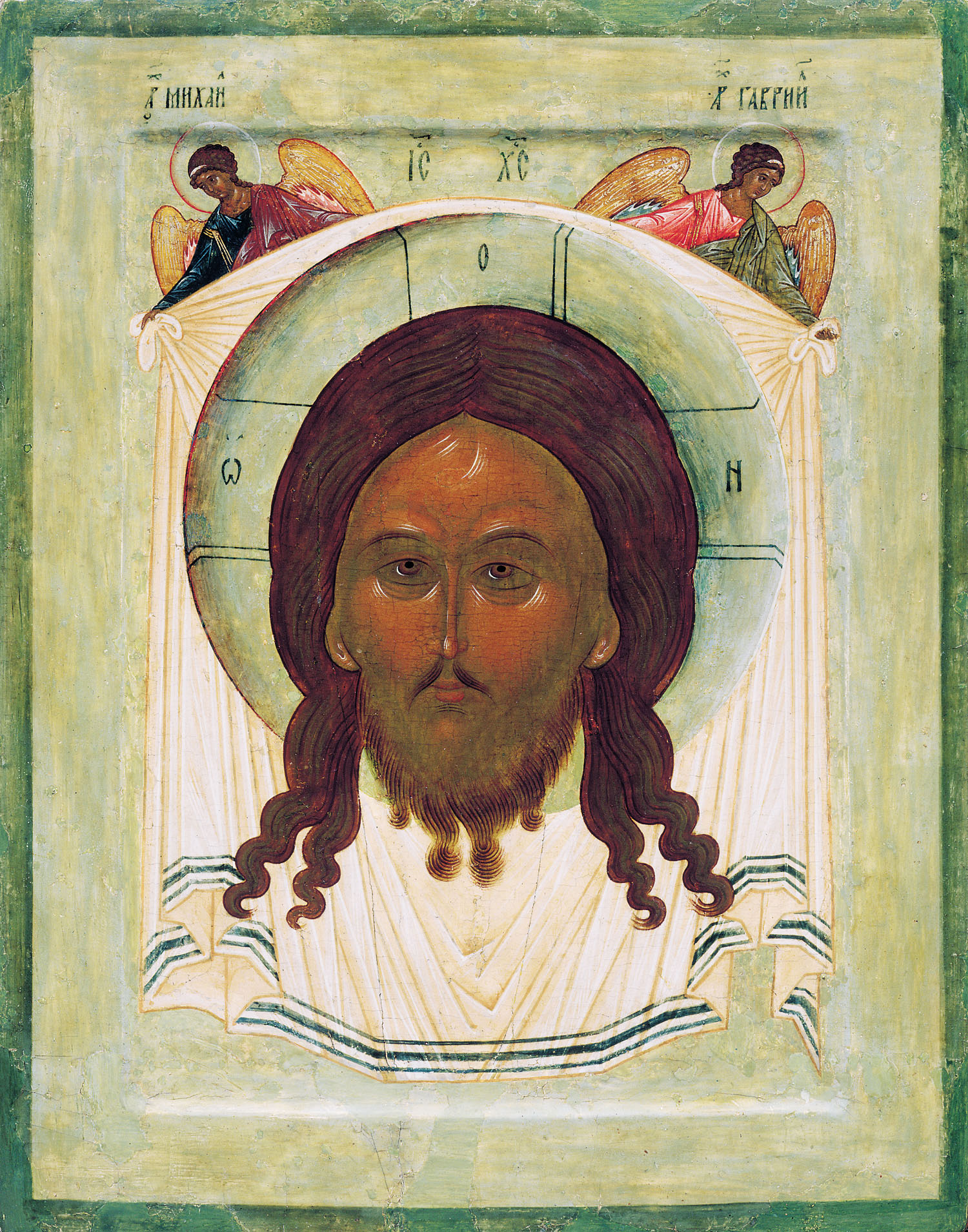 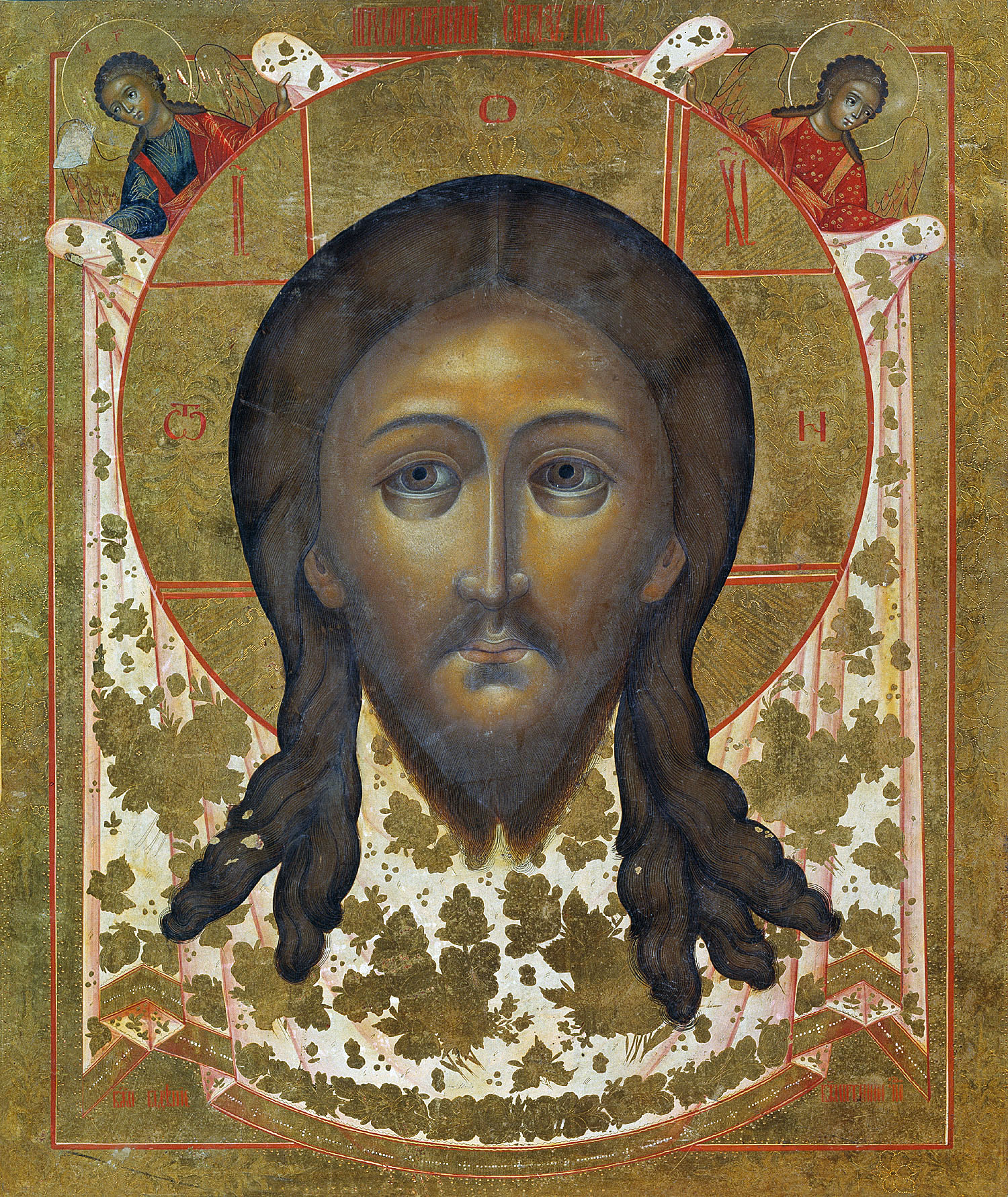 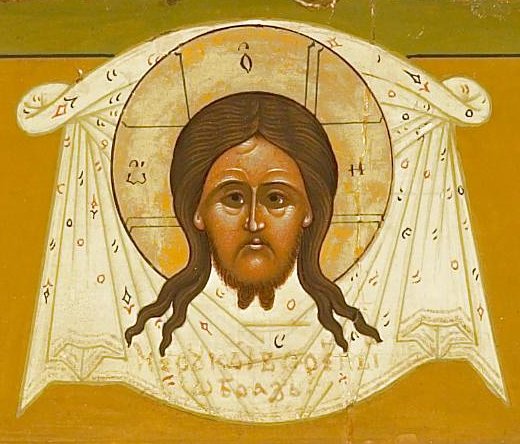 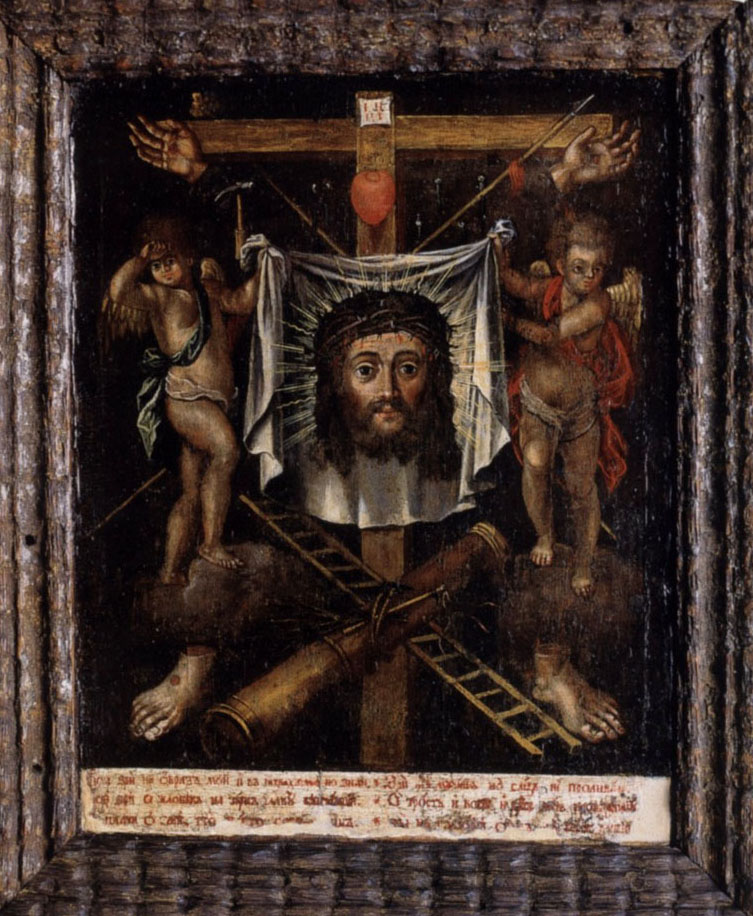 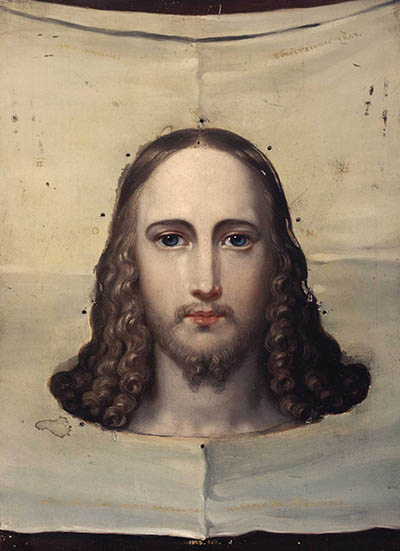