Column of Justinian in the Augusteon 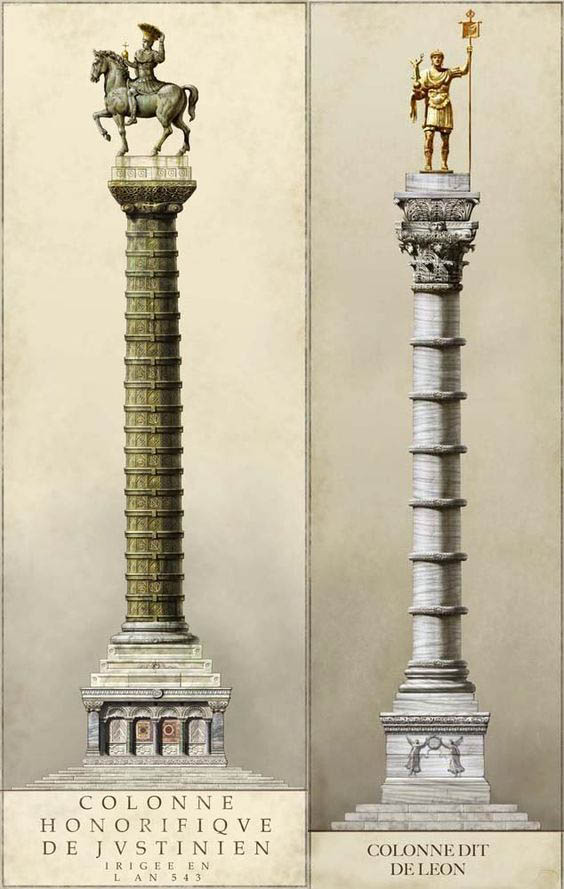 The largest and most prominent statue in Constantinople was a gigantic statue of the Emperor Theodosis.  Later it was appropriated by the Emperor Justinian I and moved to an enormous brick and stone column that was sheathed in brass plaques on a marble base.  It was dedicated in 543AD and stood outside his church of Hagia Sophia in the central colonnaded square of the city, the Augusteion.  You can see a reconstruction of the column on the right above.  It was 230 ft tall.  On the left is a lost column of Leo, won the top the artist has placed the Colossus of Barletta.

Below is a medieval illustration from a French manuscript showing the statue from the top of the column.  It is shown indoors - I don't know why because I can't read the text. 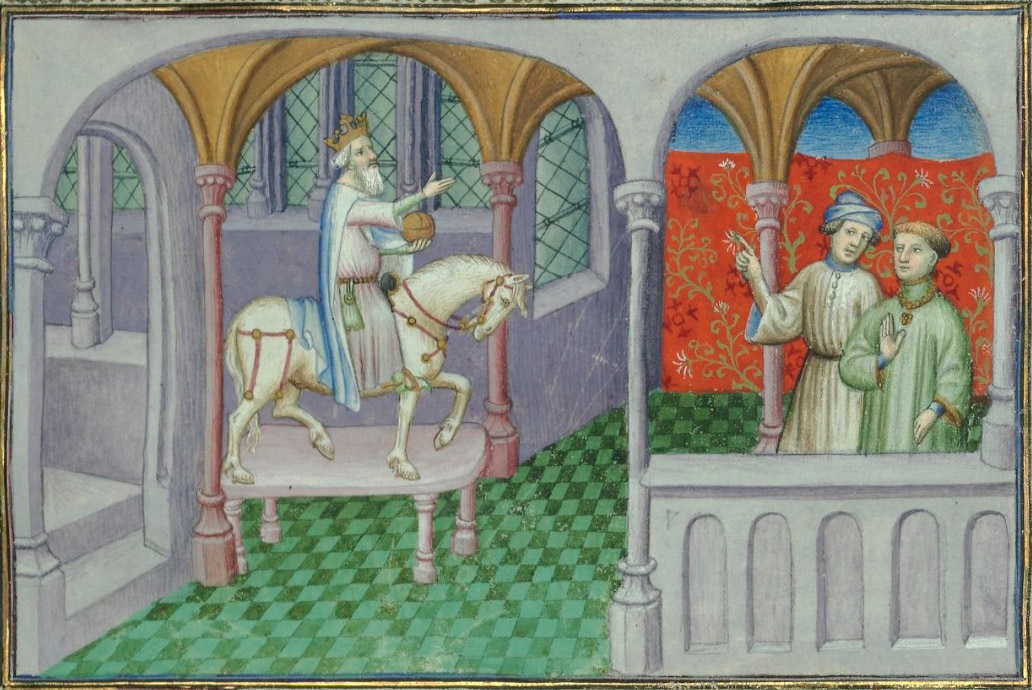 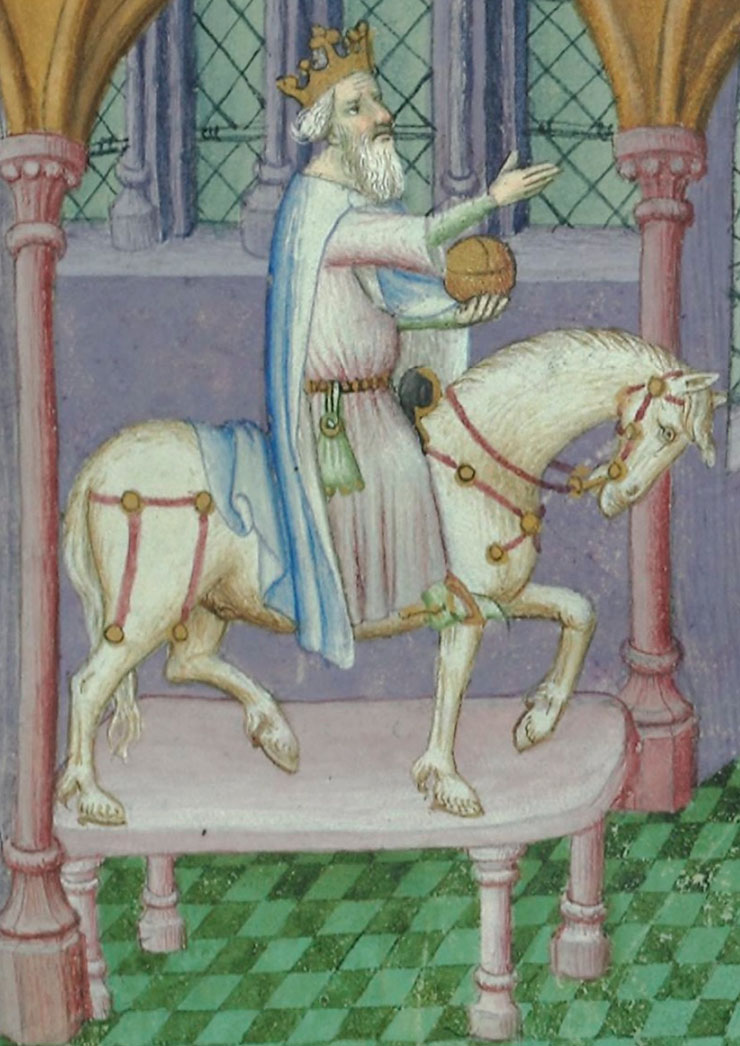 The column and statue became one of the symbols of the city, that survived until the very end in 1453.  People remarked on its fierce armor and the liveliness of the figure.

On the right is another recreation of the column with bands of figures moving up the column.  This is not accurate.  We know the sides were plated in either bronze or brass that was stripped and converted into coin by the crusaders after 1204.  This left exposed the bands of brick and stone that the column had been built of. You can see this in the reconstruction above.

The column of Justinian was taller than the dome of the Hagia Sophia (182ft) and could be seen at a great distance from the city.  The column completely dominated the square of the Augusteion.  The broad stairs beneath the column filled a large part of it.

It is thought the column was placed off-center and closer to Hagia Sophia.  The statue would have been seen with the great dome of the church immediately behind it, tying Justinian to his other great creation in the city Hagia Sophia. As the tallest monument in the city, if you looked to the left you would have also seen the great gilded statue of Constantine towering above his forum and the colonnades of the shopping porticos of the Mese.  Like their statues outside the two emperors are shown together in the mosaic of the Southern Vestibule and would have been seen as you entered the church from the Augusteion.

Justinian's  column was one of the chief attractions of the city - you could see as you rounded the tip of the city and entered the Golden Horn by sea. It was much commented on by travelers and was published in early maps and engravings.  It even appears in manuscripts.  It flashed in the sunlight and had been hit by lightning at least once.   The statue faced east with his hand extended toward the enemies of Byzantium.  His helmet was decorated with huge feathered plumes. Some of the feathers in the helmet fell out.  The historian Pachymeres describes how a windstorm had damaged the statue, and the reverent treatment the broken regalia received: “This object [the statue] had lasted intact to my own times; once, however, there blew a wind of extraordinary violence so that two of the feathers fell down and these appeared to be very much larger than they are seen [from the ground] adorning [the statue’s] head. These [two feathers] are preserved to this very day in the treasury of the Church.” Later they were replaced.

The Byzantine historian Nikephoros Gregorias tells us that the statue was restored by the Emperor Andronikos II in 1317. Andronikos II, who reigned from 1282-1328, was the son of Michael VIII whose troops had retaken Constantinople from the Latins.  After Michael had possession of the city he went about renovating it.  Andronikos continued his father's building and reconstruction program, but he soon found himself deeply in debt.  His increasing financial difficulties led to a dreadful devaluation of the carat of gold coinage that lost public confidence in his management of fiscal affairs.   Lacking funds this meant he was limited what he could do and it stopped projects already in progress.  There was even a shortage of coinage and some taxes were collected in kind. The city was full of refugees fleeing the Turks, who were overrunning the remaining Byzantine possessions in Asia Minor and driving the Christian population out.

So there was great alarm in the city when the cross fell from the orb in the hand of Justinian in the midst of these horrors. The people of Constantinople were very superstitious about their statues. They felt that the orb was magical and symbolized the power of Christianity over Islam. Despite the cost there was no question the column and statue would be strengthened and restored. It was done in very entertaining way, the feathers were replaced by an acrobat who hung from a rope stretching from the dome of Hagia Sophia and flew to the top of the column.

Later, in 1427, the ball - the famous orb of power - in Justinian's hand fell out and smashed on the pavement in the square. The Byzantines saw this as a last omen that the city would soon fall.  Below is a German woodcut from 1493 showing the column and statue, I assume that is a tempest or lightning hitting it. 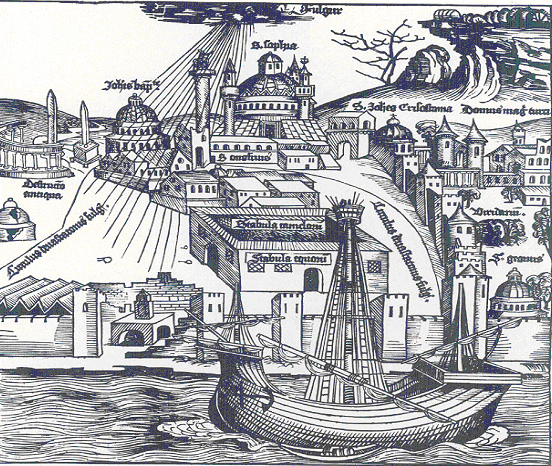 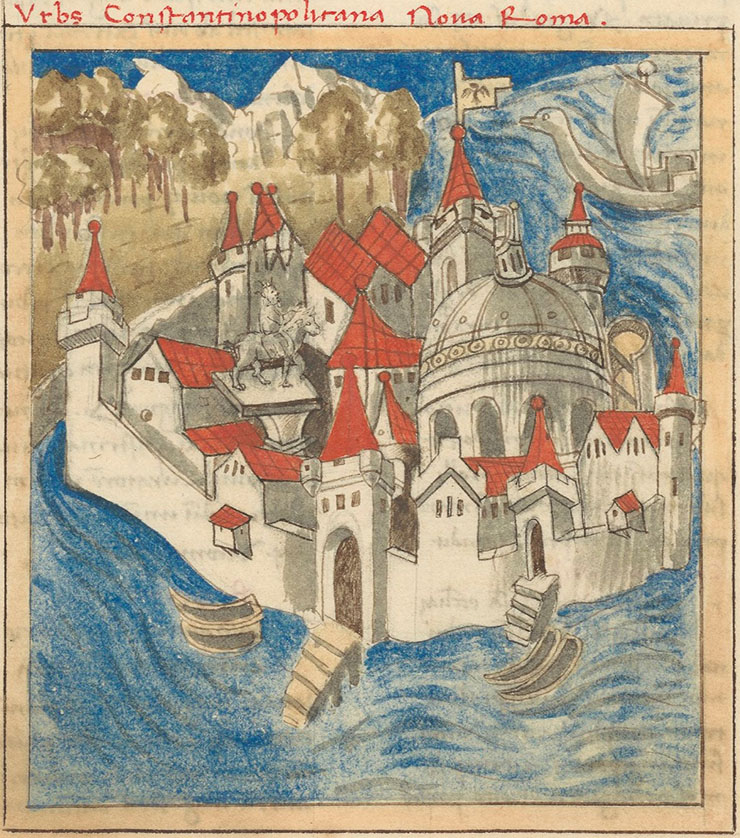 Above is another image of Constantinople showing the column and statue.

We cannot be sure if the statue was gilded or not.  The later drawing shows the orb and cross gilded, but not the body.

After the Ottoman conquest.  Sultan Mehmet II ordered it destroyed, probably in 1456 before his Belgrade campaign.  It seems Mehmet II had ambivalent feelings about the statue and considered having it repaired.  Mehmet must have ordered the parts of the statute preserved. For a number of years fragments of it including the head - could be seen in a shed near Topkapi where they awaited melting down to make cannons.  Travelers saw these remains and remarked on their huge scale. 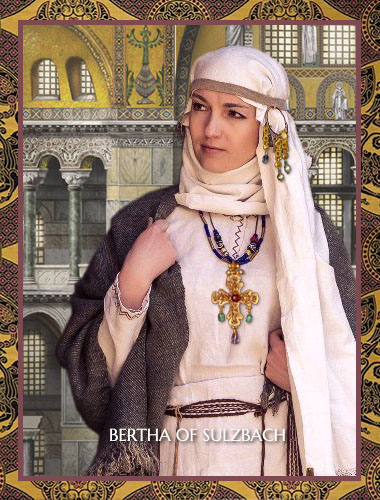 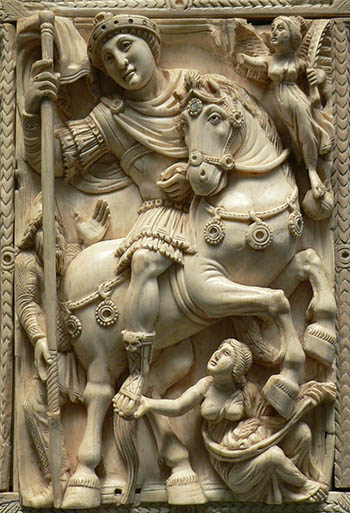 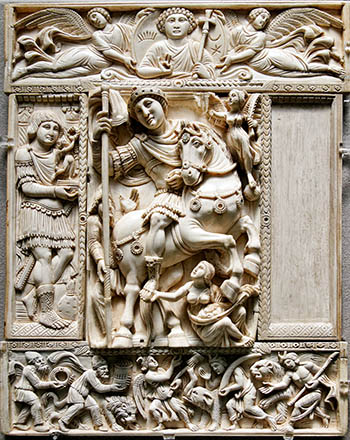 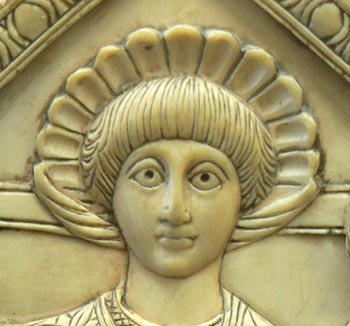 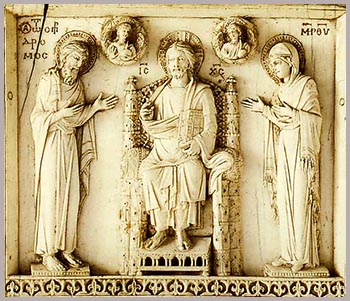