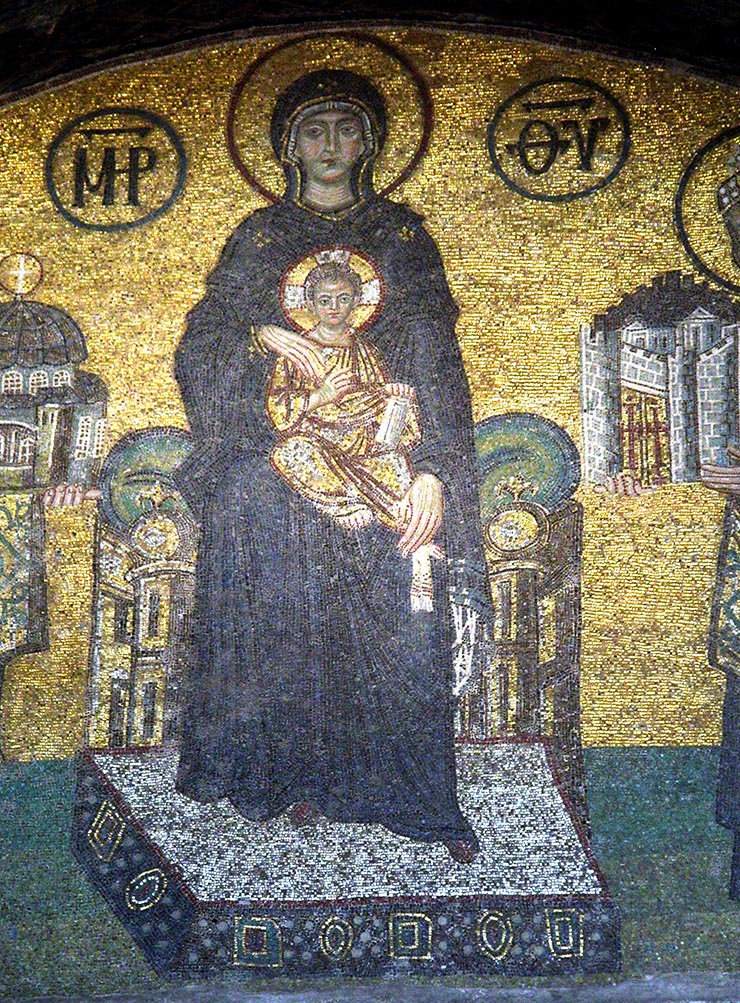 When you enter the museum today tourists come through a huge vaulted antechamber. Over the door is a big mosaic of the Virgin with Constantine and Justinian on either side of her.  In her lap sits the Christ child. This mosaic has stood here for over one thousand years. We don't know when it was concealed under whitewash and plaster, but mot of the major mosaics of Hagia Sophia remained exposed for hundreds of years after the conquest of Constantinople by the Ottomans. Why this happened is an interesting question for Islamic and Ottoman historians.  It must have been a decision made by Mehmet the Conquerer that was continued by his successors for hundreds of years.  As you enter the main body of the museum the Virgin and Child in the apse stands immediately ahead of you.  In the vastness of the space of the nave the figure is small. here it remained for hundreds of years after the church was converted into a mosque.  Millions of Muslims prayed beneath her, with the angels on either side of her in the bema arch. What did they think of her and these mosaics?  Did Muslim preachers demand the removal of the mosaic? No. Perhaps scholars of Ottoman history will look into this question. A future restoration of the museum - removing the garish Fossati additions - and restoring the appearance to the early Ottoman period would be more appropriate.  Certainly the simplicity of the interior at that time would be more attractive.' 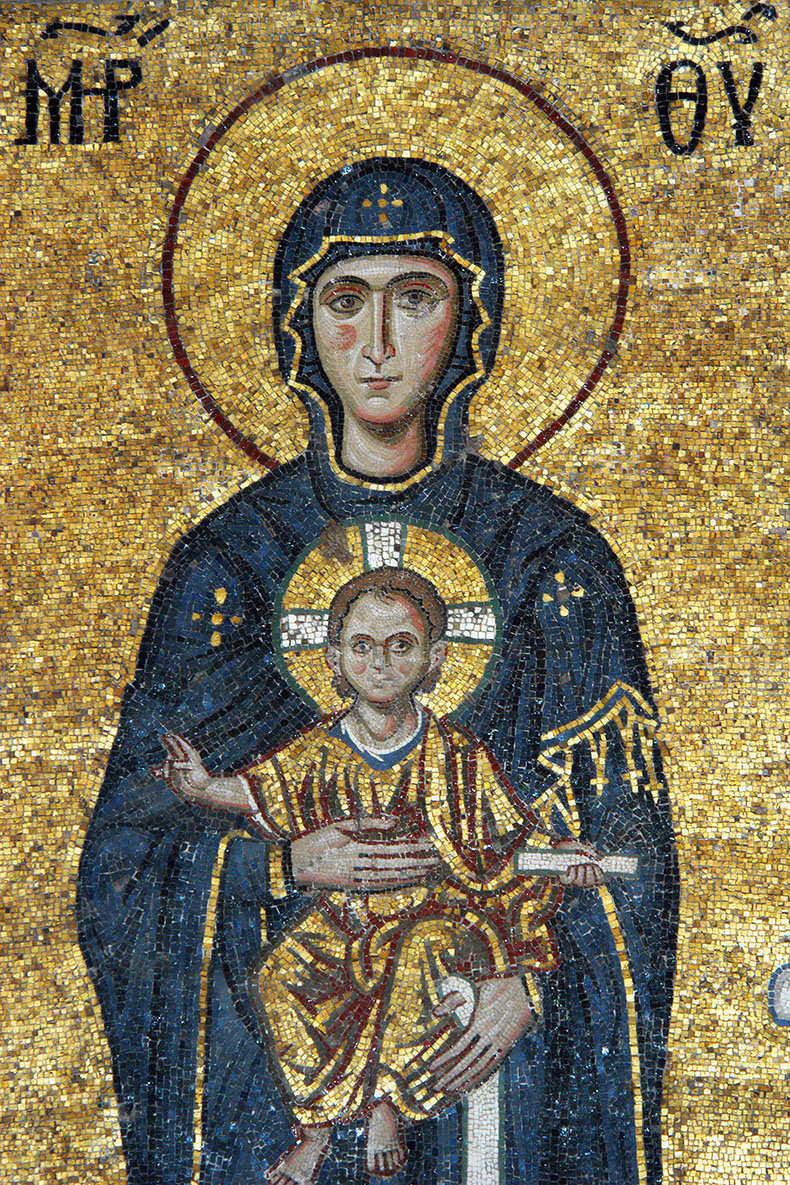 Getting back to icons of the Virgin in Hagia Sophia, there are still two fine examples of them in the upper south gallery.  This space was connected to the Great Palace by a wooden causeway and staircase. It had big windows so people could see members of the Imperial family and court process from the palace to the church above them. This elevated causeway was renowned and impressive - it was duplicated in other royal courts of the time. Years ago you could still see Byzantine inscriptions on the other wall of Hagia Sophia where the causeway was connected to the wall.  Now the doorway on the inside opens out into the open air.  The south gallery is ofter called the Imperial gallery, but it really isn't People see the images of the Imperial rulers of Byzantium here and draw the conclusion that it's a royal space.  The Great Church of Hagia Sophia was a Patriarchal one, it was not an Imperial establishment.  The Emperor could not enter Hagia Sophia without invitation from the Patriarch, who would greet the Emperor and his family at whatever entrance they used. There are three surviving mosaics in the upper south gallery; two of them have Imperial figures.  These show members of the Imperial family making donations of money and other grants to the church and the clergy of Hagia Sophia.  This space was actually a clerical space and many church councils where held there  One of the mosaic panels shows John, Eirene and their son Alexios Comnenos with the Virgin Theotokos between them.  This mosaic is very famous and is one of the highlights that every tourist who ventures to the second floor galleries sees and admires. The figure of the Virgin and Child seems stiff and hieratic to modern viewers. It represents a specific icon type of the Theotokos, one that was considered a patroness of the Imperial family and court. The other icon of the Virgin in the south gallery is to the left of Christ in the great Deesis. It contrasts dramatically in style to the other one.  The Deesis Virgin is of extremely fine workmanship and has an almost excessive softness about it. It is composed of incredibly small cubes of glass and stone and was created to take advantage of the unique lighting of its position next to the great windows of the gallery.

There were many portable images of the Virgin throughout Hagia Sophia.  Those on the ground floor were celebrated by pilgrims to the church.  Many were great works of art that inspired artists across Europe and Asia. The main focus of visitors to the church would have been the images between the columns of the great marble iconostasis of the church which were encrusted with silver, enamel, pearls and enamels. These were stripped of their adornments and destroyed after the conversion of the church into a mosque.

Icons of the Theotokos - click on a image for more 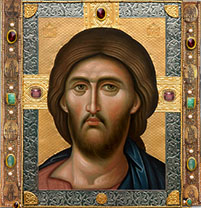 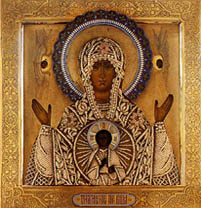 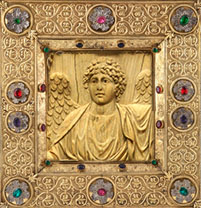 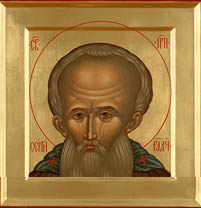 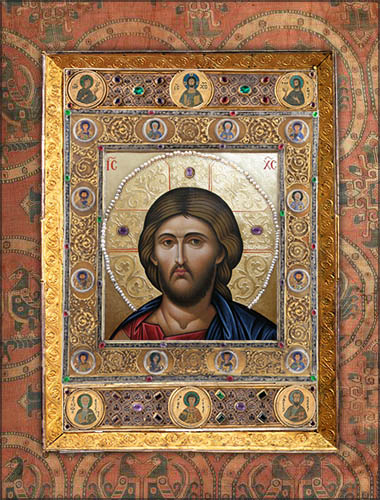 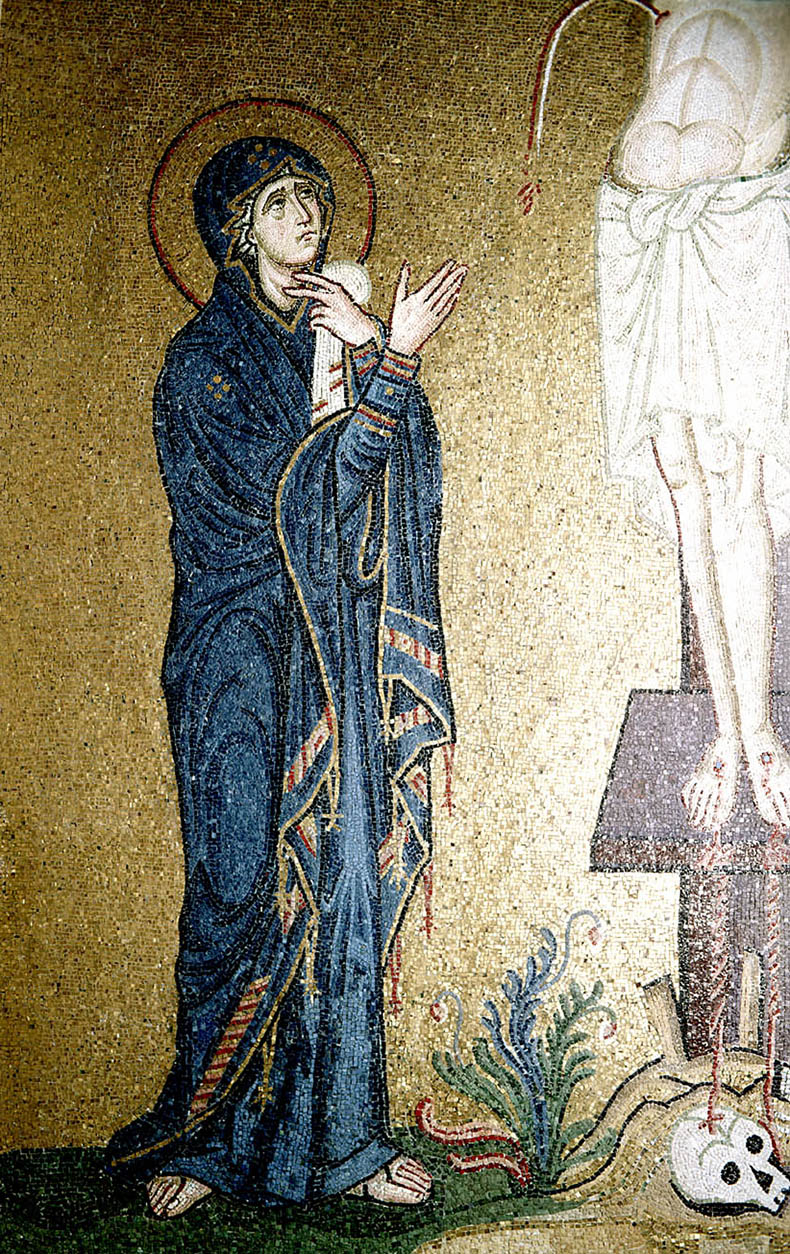 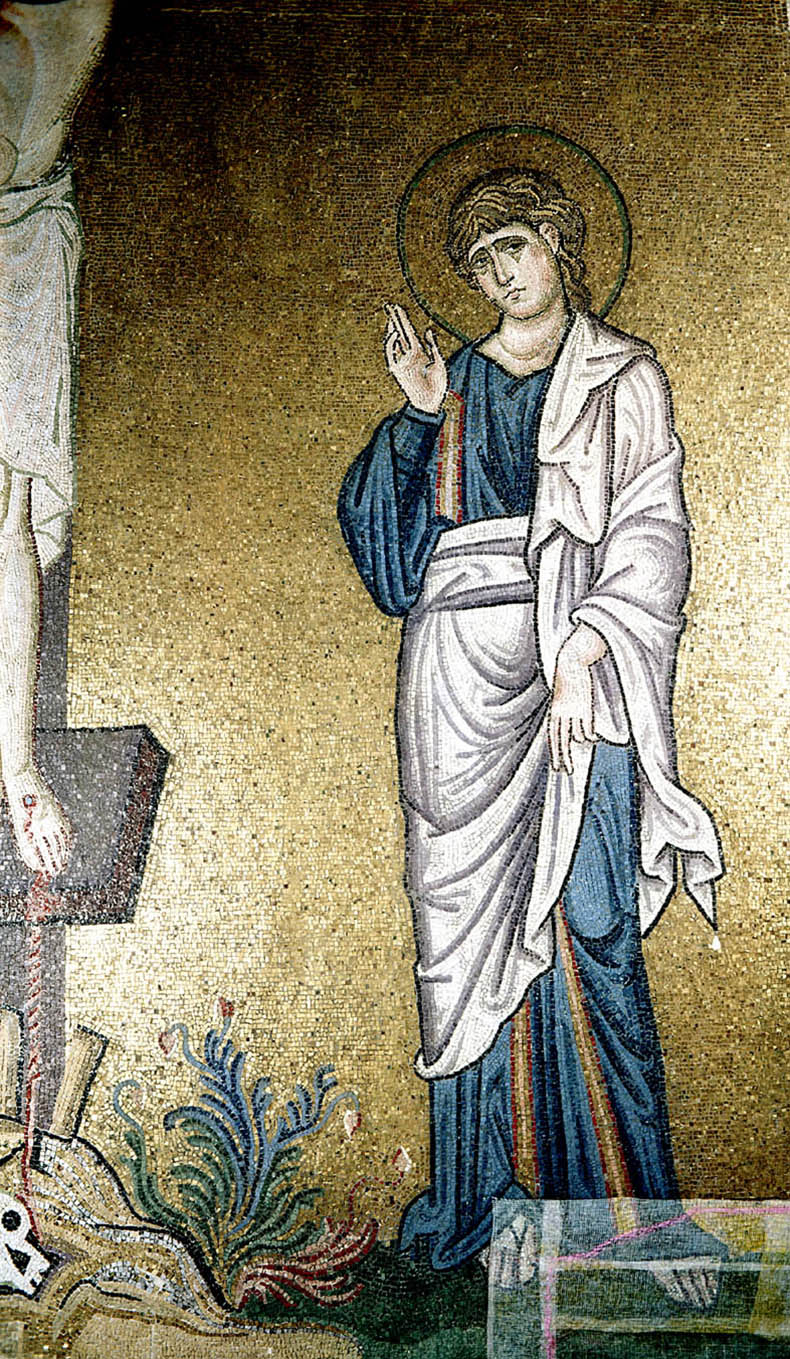 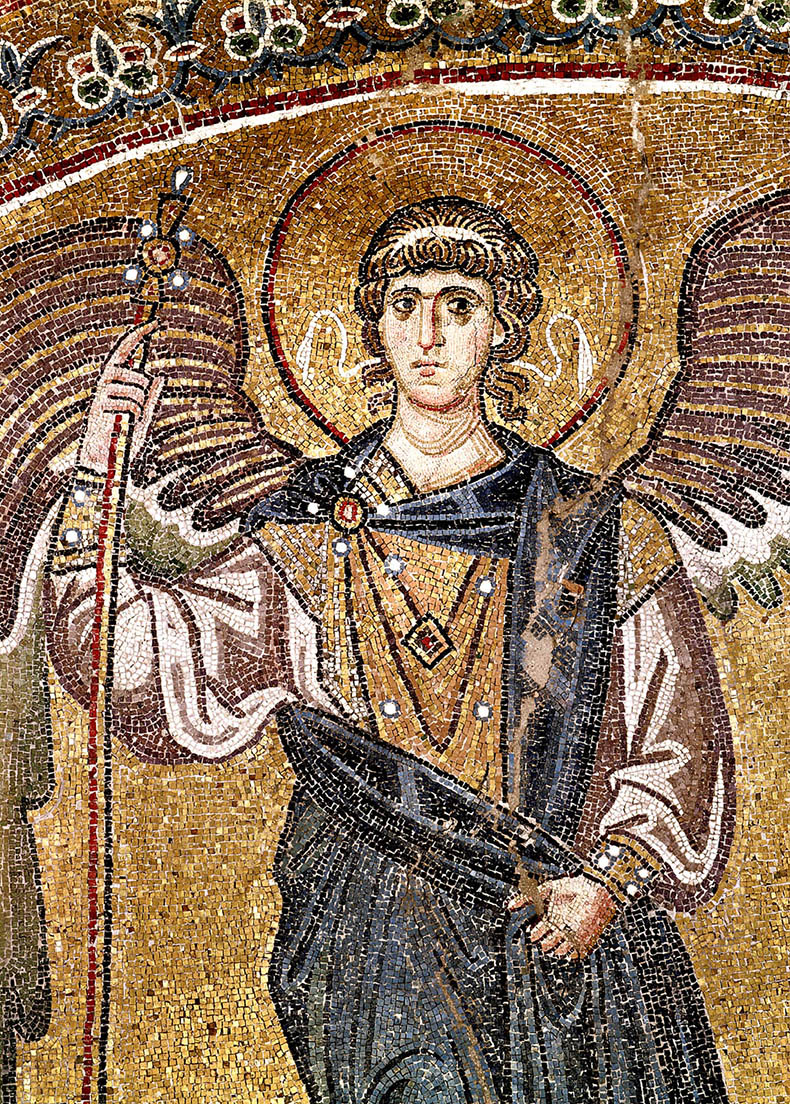 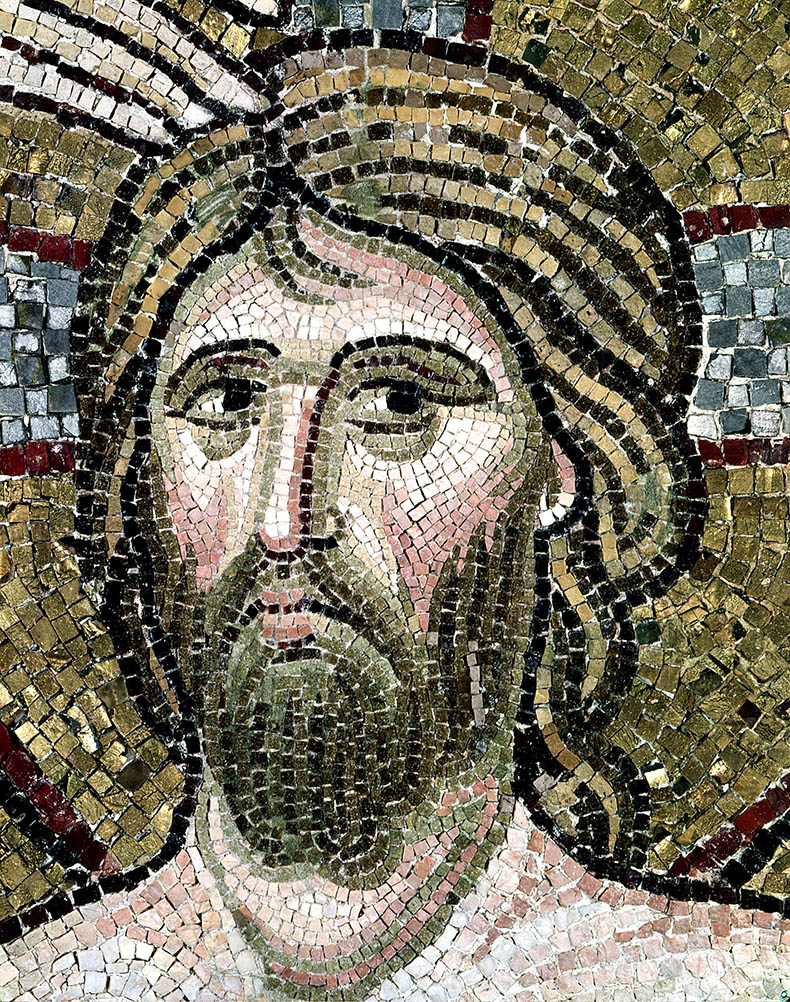