The Great Fair at Thessalonica of St. Demetrios

The site of the most fair in Byzantine world came to be the city of Thessalonica, which in later centuries was almost as important a city as the Capital. Merchants came to Thessalonica from all over the East as well as the West. This fair was probably larger in size than the famous contemporary fair at Champagne in France. The follow is taken from the Timarion, a satirical work in the style of the ancient writer Lucian. It describes the fair of Thessalonica as it was in the mid-twelfth century, a period in which that city not only was of economic importance but was becoming significant culturally as well. The fair was a major emporium for new and used clothes. Merchants traveled from fair to fair, city to city, selling ready-made frocks and second-hand clothes at all prices and levels of quality.

The Demetria is a festival, like the Panathenaea at Athens and the Panionia among the Milesians, and it is at the same time the most important fair held in Macedonia. Not only do the natives of the country flock together to it in great numbers, but multitudes also come from all lands and of every race - Greeks, wherever they are found, the various tribes of Mysians [i.e. people of Moesia] who dwell on our borders as far as the Ister and Scythia, Campanians and other Italians, Iberians, Lusitanians, and Transalpine Celts [this is Byzantine way of describing the Bulgarians, &c., Neapolitans, Spaniards, Portuguese, and French]; and, to make a long story short, the shores of the ocean send pilgrims and suppliants to visit the martyr, so widely extended is his fame throughout Europe. For myself, being a Cappadocian from beyond the boundaries of the empire, [this country was now under the Seljuk sultans of Iconium] and having never before been present on the occasion, but having only heard it described, I was anxious to get a bird's eye view of the whole scene, that I might pass over nothing unnoticed. With this object I made my way up to a height close by the scene of the fair, where I sat down and surveyed everything at my leisure. What I saw there was a number of merchants' booths, set up in parallel rows opposite one another; and these rows extended to a great length, and were sufficiently wide apart to leave a broad space in the middle, so as to give free passage for the stream of the people. Looking at the closeness of the booths to one another and the regularity of their position, one might take them for lines drawn lengthwise from two opposite points. At right angles to these, other booths were set up, also forming rows, though of no great length, so that they resembled the tiny feet that grow outside the bodies of certain reptiles. Curious indeed it was, that while in reality there were two rows, they presented the appearance of a single animal, owing to the booths being so near and so straight; for lines suggested a long body, while the cross-rows at the sides looked like the feet that supported it. I declare than when I looked down from the heights above on the ground plan of the fair, I could not help comparing it to a centipede, a very long insect with innumerable small feet under Its belly.

And if you are anxious to know what it contained, my inquisitive friend, as I saw it afterwards when I came down from the hills - well, there was every kind of material woven or spun by men or women, all those that come from Boeotia and the Peloponnese, and all that are brought in trading ships from Italy to Greece. Besides this, Phoencia furnishes numerous articles, and Egypt, and Spain, and the pillars of Hercules, where the finest coverlets are manufactured. These things the merchants bring direct from their respective countries to old Macedonia and Thessalonica; but the Euxine also contributes to the splendor of the fair by sending across its products to Constantinople, whence the cargoes are brought by numerous horses and mules. All this I went through and carefully examined afterwards when I came down; but even while I was still seated on the height above I was struck with wonder at the number and variety of the animals, and the extraordinary confusion of' their noises which assailed my ears-horses neighing, oxen lowing, sheep bleating, pigs grunting, and dogs barking, for these also accompany their masters as a defence against wolves an thieves. 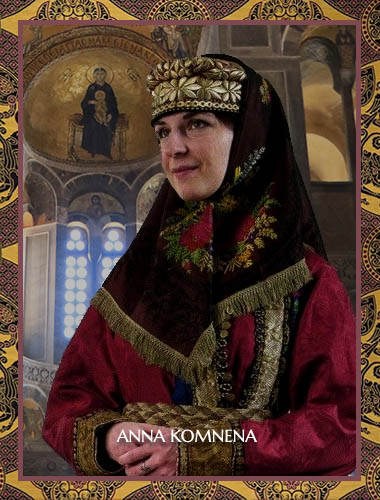